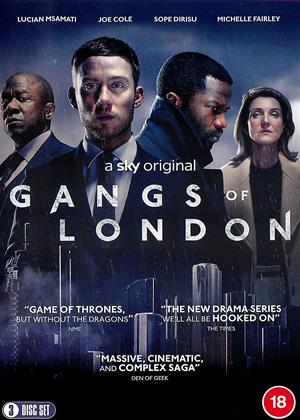 Reviews (3) of Gangs of London

The first episode is a bit ropey and features some iffy script writing and stilted acting.

Luckily this is corrected in the second episode and from then on really picks up.

Some bits are rather far fetched and the constant graphic violence begs down some of the earlier episodes but luckily from the half way point the show finds its direction and focuses more on the story.

OK so I was not sure what to expect from this.

To be fair, it is no more unbelievable that other dramas base don supposed truth, like US drama The Americans - it is drama not documentary, after all.

I suspect I am the wrong demographic for this, (teenage boys and those who like action movies are), though I thought The Sopranos and esp Breaking Bad were sublime - premier league stuff. This is occasionally interesting and entertaining, though sometimes clunky, with cartoon characters and shoot-em-up nasty violence which no doubt aims to shock (though so extreme is it that it isn't really credible).

However, like so much UK drama it is painfully slow in parts - reminds me of Hinterland, the Welsh TV drama with all those shots of people staring into the middle distance and thinking, for ages, looking all profound. Oddly that is counterbalanced here with very violent scenes and stylised violence which will no doubt appeal to kids and esp the south-east Asian market (so no surprise that the director specialised in martial arts films and lives in south-east Asia). I think perhaps SPOOKS is the only UK crime drama that doe snot do this and is fast-paced and snappy throughout.

A shame I thought that no native English gangsters were shown - there have been plenty, the Krays and the Richardson gang still going as are others. It;s no all ethnic gangs - and maybe they strived to tick too many diversity boxes here.

Annoyingly, as in many dramas and movies, a lot of characters look alike too which makes a sometimes confusing plot even more confusing.

Ho hum, Meh for me. Not dreadful, but unsure if I shall bother with series 2. Maybe I shall rewatch Breacking Bad or The Sopranos instead.

More wooden than a tree - Gangs of London review by kg

This is so confusing it's hard to keep up.

The acting varies from ok to dreadful.