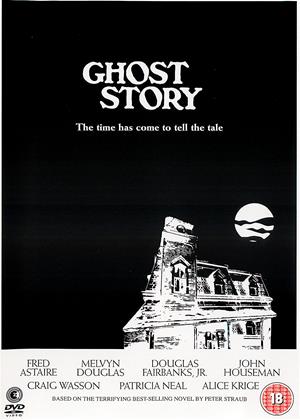 A small town in the grip of winter. Four seasoned gentlemen delighting/torturing themselves by telling ghost stories by the fire-side, under the aegis of The Chowder Society. A mysterious young woman whose face is a blur in any photograph. And then the mysterious deaths begin …

This film is based on the novel by Peter Straub and has a glittering cast of veteran entertainers – Fred Astaire (as Ricky), Melvyn Douglas (John), John Houseman (Sears), Douglas Fairbanks Jr (Edward), and comparative youngster Craig Wasson as both David (who dies early on after the girl he’s sleeping with turns into a rotting corpse) and Don Wanderley, Edward’s two sons. Wasson is excellent throughout and makes a real impression, not easy in the company of such great performers.

To join the ranks of the Chowder Society, Don tells a ghost story of his own. He talks of a girl, Alma, whom he was seduced by. This girl, played with brilliant eccentricity by Alice Krige, displays increasingly erratic behaviour until Don tells her he wants to end their relationship. A month later, Alma strikes up a relationship with his brother David. Shortly after, David is dead.

This story seems to resonate with the old men, and they have their own tale to tell. 50 years earlier, the four of them got together with an upper crust ‘good time girl’ Eva. Petty jealousies, alcohol and general immaturity turn events nasty one drunken evening, and Eva’s toying with their collective affections and egos seals her fate. By accident she is murdered, and in panic, they bundle her into a car and drive it into a river. As the car slides beneath the water, she moves, her hand scrambling to find an escape from her inevitable doom.

This is what the Chowder Society have been living with all these years, and it becomes apparent that Alma is somehow a physical manifestation of Eva as she was back then. Why she has waited 50 years to exact her revenge is unknown. As the car is at last dredged from the water, her putrefying corpse lumbers out and collapses, dead one final time: very effective but after all the build-up, rather too brief.

The film is too long. Some pruning would have helped, especially an unexplored sub-plot concerning two low-life red herrings who serve no purpose, other than to look conspicuous in the modern setting. And yet the effects, used very sparingly, are excellent and there are moments of real tension. Equally, the town in the icy grip of winter is extremely well achieved and makes the closed off community look particularly inescapable.