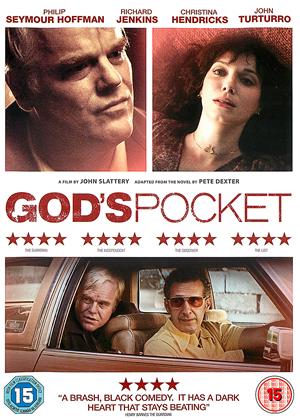 Gosh this film is depressing. Though, probably unintentionally, the sheer doom-laden scale of the chain of events involving stolen meat, a dead body, an alcoholic hack, shootings at flower shops etc becomes rather funny. Black comedy at its blackest! Dead bodies going AWOL are always funny in films.

This tragic drama Shakespearean or perhaps even Ancient Greek in the way the behaviour of one mentally unstable young man starts a series of events which leaves a trail of bodies and misery throughout this sink and sinking town. A domino effect that no-one has the energy to stop.

It's set in the 1970s (apparently 1978) though I only realised this after a while when old-style phones were ringing and people were wearing funny clothes like flared trousers! The area of God's Pocket is in Philadelphia apparently, though it was all filmed in Yonkers, New York. And it touches on themes of the day: racism, the mob, the American underclass etc.

It's also the last movie the late Philip Seymour Hoffman acted in, and his character anchors the story as the world collapses around him; however, his penultimate movie, A Most Wanted Man, was by far the better film. This is a small, modest film which, typical of so many US indie movies, tends to wallow in the underclass poor America which Hollywood never really shows or cares about.

However, the film for me is stolen from the lead actors by the excellent British actor Eddie Marsan (Sixty-six; Tyrannosaur etc) whose cynical cash-strapped undertaker steals the show for me from the flashier more well known leads. In a better world, that might get a best supporting actor Oscar nomination.

One BIG gripe: there are NO HOH subtitles with this film, which, considering so many characters mumble and slur their lines in the now-compulsory naturalistic way, is a real problem. All viewers, I am sure, would appreciate hearing all dialogue clearly using subtitles (you don't have to be deaf to use them!)

Probably 3.5 stars but 3 because no subtitles!

If you want dreary - God's Pocket review by BE

I truly hope PSH's talent is not judged by this awful movie. Unfortunately, there were no subtitles available with the consequence that I barely understood any of the sloppy American dialogue. I don't think it actually mattered very much as nearly every other word was an expletive. PSH's diction was Brando-esque at the best of times and this is no different. An extremely disappointing film.

I've given this a one star as we found the dialogue incomprehensible as delivered by most of the characters. Yhis includes martin Seymour Hoffman. We gave up after twenty minutes!