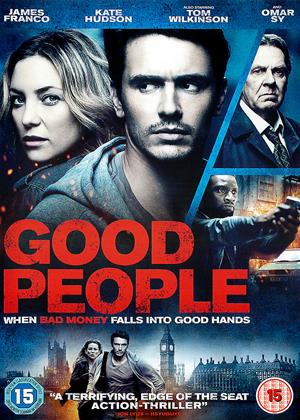 If you find some money in the wall of your recently deceased neighbor’s apartment, do you inform the police? If you answered yes, you are vastly more intelligent than the protagonists of Good People. If you answered no, you’ve probably never seen a get-the-hidden-money crime movie as I’m sure the characters in this movie have never seen. The poor couple in this story make the idiotic mistake of keeping the money, hoping that everything will work out as if it was karma that they deserved such fortune. If only life and the movies were that simple and sweet.

The script makes some earnest attempts to convince the audience that these two made the right choice. Down-on-his-luck Tom (James Franco) is desperately low on funds as he attempts to renovate a new home for a family life with his wife Anna (Kate Hudson). Anna is hopeful, but Tom not so much as he attempts to hide an eviction notice. So the discovery of hidden cash seems to be the easy answer to their problems. It might be a more believable resolution if the film didn’t open with a brutal mob shootout. The couple at least proceed slowly with their stupidity as they wait a few days before until the cop or mobsters come knocking. After that point, they decide only to spend the money on fixing the eviction and their new home.

But, wouldn’t you know it, the mobsters come calling right after they’ve spent a few. Now being assaulted by stereotypical goons who seem to repeat “where is the money” ad nauseum, their only hope is a detective who doesn’t play by the rules. Detective Halden (Tom Wilkinson) is soon on to their little scheme and agrees to cut them a get-out-of-jail-free card if they can help him take down the bad guys. As you might expect, he’s doing it all of the books since he’s spit on by the higher-ups. He’s got an axe to grind with these drug dealers after his daughter died to an overdose.

To keep things at least a little bit interesting, there are two gangs after the money. The first contact is the more business oriented gangster Khan (Omar Sy). He offers Tom a choice of picking a side in a battle he doesn’t know he’s apart of. The competition with Khan is the more brutish Witkowski who is more about breaking bones than negotiating. There is a money drop scheduled so that Witkowski can get his money and Halden can nail his suspects, but that would be far too simple of a conclusion so random shots fired are thrown in.

In a somewhat surprise moment of goofiness, the final showdown takes place at Tom’s housing project where he stages a trap in the style of Home Alone 2. Witkowski and his partner in crime venture into the old house where they face such traps as nail gun shots through the floor and pitfalls with spikes. Yes, they actually pull the old spike trap that was somehow perfectly positioned for the bad guys to fall into, despite the rather large area of the spikes. Tom is just fortunate that when the intruders enter, they force him to the side rather than directly forward where he would’ve fell through the floor to his death. Everything just sort of ridiculously works out in this scenario as the killers manage to fall for every trap and even create some new ones accidentally.

There’s something rather admirable about how a film like Good People goes from zero to zany so quickly and with little reason. Shot in a dreary blue London, the somber tone reverts from paced out character development into crazy let’s-fight-the-mobsters action territory. The illogical progression it accomplishes is just mind-blowing. Tom was once a struggling contractor and now he’s a master of the craftsman house of horrors. Anna was once a fearful wife, but now she apparently has the strength and smarts to kick the bad guys down stairs. At the very least, they come as more welcomed ludicrous surprises given how everything else in the picture is action cliche basics. Tom and Anna may be good people in their intentions, but their brains are miles away along with any genuine thrill in this ridiculous mess of a picture.