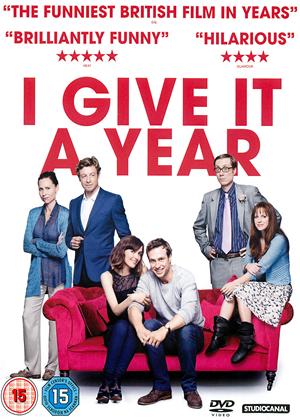 Rent other films like I Give It a Year

This is a highly disappointing film . You don't root for any of the characters as none of them are that likeable. I also don't understand why they got married in the first place either. I would give it a miss !

As rom coms go this was ok, I didn't think it was excellent!

There was some funny moments in but I'm glad I didn't go to see this at the cinema.

I Give It a Year review by Alyse Garner - Cinema Paradiso

A film that is supposed to be the reality check to all those and they lived happily ever after rom-coms I Give it a Year follows Nat and Josh, played by Rose Byrne (X-Men: First Class) and Rafe Spall (Life of Pi) respectively, as they stumble through their first year of marriage following a whirlwind romance and the realization that they might not be right for each other.

With writing and direction from Ali G writer Dan Mazer this film ought to have been a quirky but charming antidote to all those American rom-coms. Over direction, poor scripting and obvious humour cause the film to fall flat however, making I Give it a Year a pale shadow of the successful British indie-comedy it could have been.

Looking at the ingredients individually; a great cast (including Simon Baker, Minnie Driver and Anna Faris), off-beat humour and an original storyline, there is plenty in this film to make it enjoyable. And in the end it isn’t entirely hateful, it is simply disappointing. Incidents including a slide-show where pornographic pictures are shown to the embarrassment of parents and rather lame school-yard style penis jokes populate the film and distract from moments of genuinely awkward comedy gold like the romantic dinner scene, complete with violinist, champagne and white doves – one of which defecates on Rose’s beautiful outfit – whilst Mazer’s obvious direction and the over zealous performances (another fault of Mazer’s over direction) steal all the charm out of the film.

Although I couldn’t say I outright hated this film I am somewhat loathe to recommend it, with a handful of other unusual British romantic comedies out in the last eighteen months I’d suggest that fans of the genre simply give this one a miss.