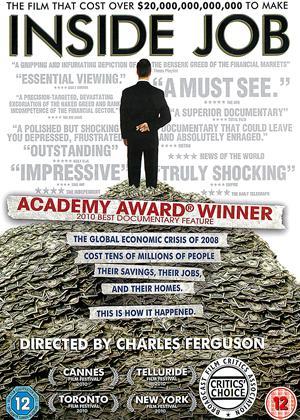 Reviews (1) of Inside Job

Hard work for a non-economist - Inside Job review by JD

If you do not consider yourself au fait with economics you will find this hard going. But get a few Taurine drinks in sit with a pad of paper this is worth it. I have seen a few documentaries exposing the incredibly corrupt US government (particularly Bush jr. but not excluding Obama) but this is jaw dropping. I am sure most goverment's financial policies are heavily influenced by corruption, greed and self-interested lobby pressure but the US has got some good documentary writers to expose it. It is not just an exposure of evil bankers and corrupt politicians, economists get a full blast of vitriol.

Inside Job is a disturbing documentary that looks into the global financial crisis of 2008/9. Narrated by actor Matt Damon the movie involves extensive interviews with journalists, economists, politicians and academics alike and tracks the underlying role of corrupt businesses on causing the worst recession in America since the Great Depression.

The film uncovers many a disturbing fact about the control the business industry has upon politics and regulation, suggestions of manipulations and corruption within the banking industry are the back bone of the film, which takes a decidedly liberal and left wing moral standpoint.

Upsetting facts fill the runtime, revealing shocking changes to the lives and economies of every day Americans, whilst those at the top flourish. The film won an Academy Award for Best Documentary Film in 2010, and understandably so. The film is expertly researched and presented in an emotive and relatable fashion, despite dealing with various complex and troublesome issues. The five part split of the film helps to cover all the bases and each part weaves together to create a solid understanding of the multi-layered narrative.

The film leaves you feeling utterly defiant and enraged; boiling your blood to a level sure to promote outcry at the wrong doings of the banking industry. An excellent watch, politically and emotionally exhilarating.