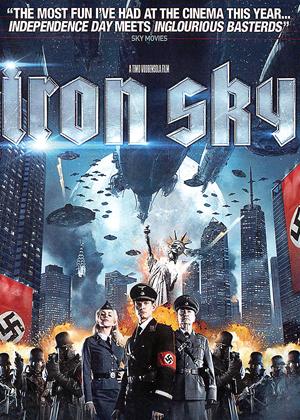 Avoid, unless you're a masochist - or a moon-Nazi - Iron Sky review by RP

The best I can say is that it's mercifully short at 88 minutes. But those 88 minutes are filled with one of the most dire films I have ever seen.

If it had been played straight rather than for laughs (?) I reckon the film could have turned very much better. It's a sci-fi film with CGI special effects that are pretty good for a Finnish-German-Australian and crowd-sourced low budget project - but unfortunately it has its tongue firmly in its cheek and is played out as a political satire. This simply doesn't work and the attempts at humour fall flat on their face. Sorry, but it didn't even raise a smile from me, unless a grimace counts.

The storyline goes something like this... In 1945 a group of Nazis escaped and set up base on the dark side of the moon, where they have built a largely mechanical invasion fleet ready for a triumphant return to earth. Meanwhile, down below it's 2018 and re-election year for a Sarah Palin lookalike US President. As a campaign stunt they send a 'black on the moon' (geddit?) expedition who stumble across the moon-Nazis. Not liking the fact that one astronaut is a black male model, the moon-Nazis 'albinise' him and use his smartphone as compute power for their sooper dooper space battleship, the Götterdämmerung. Needing a replacement for the phone, they send a mini-expedition to earth, where the president's campaign manager falls for the wannabe-Führer, and the expedition returns with a tablet computer for the battleship. Confused? You will be, as a space battle commences, the US 'wins', but global war breaks out as the US lays claim to the moon-Nazi's stock of Helium-3.

The script is dire - but at least the Nazis speak German rather that accented English. Have I seen worse? Yes - but nowadays I try to avoid them and regrettably I didn't manage it this time. 1/5 stars. Avoid, unless you're a masochist - or a moon-Nazi.

Finnish director Timo Vuorensola wants to make Nazis funny in ‘Iron Sky’. Here they are Moon Nazis, their HQ is the moon, and to rule the world is just one of their many out-of-this world plans.

Udo Kier stars as General Wolfgang Kortzfleisch. It is 2018 and he and most of the Nazi scientists have been living on the dark side of the moon since the fall of their empire in 1945. Their home base is a fully functioning military base and while stationed on the moon, they have been creating the Götterdämmerung, a warship that would reclaim Earth as their own. Nazis almost had the world in World War II, so this is crazy talk that could almost happen.

But ‘Iron Sky’ is not a spoof or even a parody. It’s a movie that takes itself too seriously for something that wants to be funny. Udo Kier knows how to balance ham and acting chops but the rest of the cast are just dour and dumb. As it is, Moon Nazis of the future should be like shooting the moon –mind the pun— when it comes to plot, but good grief, spare a few laughs will you? A few is too many from ‘Iron Sky’.

Whose fault it is that made an interesting pitch as ‘Iron Sky’ into a dull interpretation, who knows. Let’s blame all (except Udo Kier, he knows what he’s doing, he knows it’s dull and that’s what he likes) for this monstrosity. The effects are no better. We’re not expecting George Lucas-later ‘Star Wars’ special effects here but if you’re making funny sci-fi at this day and age, technology can help you sparkle (and even cover up the blandness.) The script is nonsensical (thanks, Michael Kalesniko and Timo Vuorensola); for something this outrageous, the nonsense should have been well thought out.

However, watch ‘Iron Sky’ on a lazy afternoon while you’re chugging beer and munching on chips. You’re awake at the beginning, take a nap in the middle, and awake at nighttime realizing the movie is still on. It’s fun when you make it. Maybe.