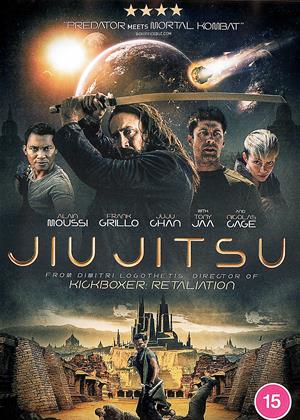 For a martial arts actioner, this is an incredibly dull and dour film, with zero plot, zero characterisation and loads of talkie close-ups. The action consists of little more than a bunch of fighters practising their moves on stuntmen who attack one at a time and fall in exaggerated poses. It was filmed in Cyprus but you wouldn’t know it as no attempt is made to utilise the island’s dramatic landscapes. Thai star Tony Jaa deserves better, while Nic Cage in a minor role probably doesn’t by now. Cage’s stuntman gets more air time than Cage himself, while even Jaa, sadly, is credited with two stunt men.

Most of the blame must go to director Dimitri Logothetis, who has no idea how to film a fight scene except by hurling a hand-held camera into the stagey action. A Predator-style alien turns up as the chief baddie, but he has no more moves than any of the other stuntmen. Never has so much martial arts action been so repetitive and boring. Don’t be fooled by the trailer. 2mins of this stuff might appeal, but 100 mins is 98mins too long.