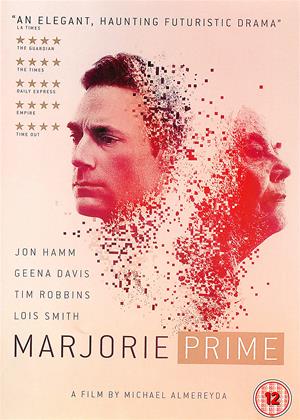 Synopsis:
In the near future, a time of artificial intelligence: 86-year-old Marjorie (Lois Smith) - a jumble of disparate, fading memories - has a handsome new companion (Jon Hamm) that looks exactly like her deceased husband Walter. This is a Prime a holographic simulation programmed by Marjorie's daughter (Geena Davis) and her husband Jon (Tim Robbins) to feed the story of her life back to her. But as their interactions develop it becomes clear that each of them has a very complex relationship with their shared histories, with each other, and with this new technology they've invited into their home.
Actors:
Stephanie Andujar, Hana Colley, Geena Davis, Hannah Gross, Jon Hamm, India Reed Kotis, Leslie Lyles, Cashus Muse, Tim Robbins, Lois Smith, Azumi Tsutsui, Bill Walters, Marshall Axt
Directors:
Michael Almereyda
Producers:
Michael Almereyda, Uri Singer
Writers:
Michael Almereyda, Jordan Harrison
Studio:
Bulldog Film Distribution
Genres:
Drama, Romance, Sci-Fi & Fantasy
Awards:

I found this a quiet and thoughtful play on memories, how they differ between people and form an identity.

This is Sci-Fi, given the AI hologram 'primes' the feature throughout -- an entirely believable technology -- however the tech here really just kick starts the discussion of memories between the cast of characters and how they differ in interacting with tech.

A very dialogue heavy film and quite the slow burner, but nevertheless I found myself quite engaged and the taught string-led score created a bit of hypnotic atmosphere.

You don't see a lot of films like this being made and as such I really enjoyed the refreshing take on the theme of human vs machine.

This was a thought provoking story which unfortunately doesn’t quite translate to the screen. It made sense when I found out it was based on a play and it is probably best suited for that format.

The film is almost entirely shot as simple conversations - over the shoulder reverse shots, wide 2-shots - and not much else to pull the viewer in. I found the story interesting but only because I struggled and forced myself. The usually great cast is wasted here too. They feel synthetic and artificial both in human and AI form.

As for the story, the ideas presented had me thinking afterwards. The way memory works, how it fades with time and new, but not necessarily accurate memories are formed from the stories we tell each other. Traumatic memories are repressed but surface every now and then. This provided some satisfaction but not nearly enough for me to recommend. If anything, go and see the play.

.. it appeared to me that the AI holograms are every bit as as boring as their human counterparts...

Such a waste of good actors. The film starts out with an innovative plot but soon deteriorates into a very convoluted and boring story. Lois Smith, in which I think was her last film, glows, at times, as Majorie. For 50 years or more, Smith had a good career, and I was happy to see her working till the end.

This travesty of cinema is based on a stage play and looks like it. Deliberately worded and acted, its emphasis is on script and thespianism rather than any visual interest. As such, it lacks naturalism and dynamism, which renders it slow and contrived. What passes for action takes place mostly on one set (a house) and the talking heads are filmed with a mostly static camera. As to what they have to say, you could fast forward whole screeds of it and miss nothing. The stagey dialogue often goes nowhere.

Many critics give it a good rating, but only because of the actorly performances. There’s a germ of an idea here, but cinema it ain’t. If you’re not convinced, watch the trailer, which opens with the one brief and unnecessary nude scene, as if the distributors know that what follows is backside-numbing.

This film is like watching paint dry as is just a boring story. I have watched 1 hour and cannot bring myself to watch My more. Don't believe the good reviews from critics and the luvvie brigade.

I gave up after a few minutes, sadly! Lacks any real grip and the characters are dull. Shame, because it looks like it could be an interesting premise.