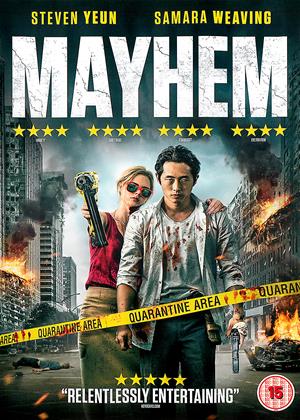 Much Better than expected - Mayhem review by sw

Its hard to describe this film as its very different.

Its a blend of the raid, 28 days later but not zombies and american psycho because is got dark comedy with narrative.

The action is pretty constant. Quite a bit of blood but not enough to be unreal.

Id say a cleaver well made film with great casting.

Ive just tried to write what id like to of read when deciding weather to rent or not.

Mayhem with a touch of the comical - Mayhem review by porky

I thought this was Great Fun.

8 Hours in which to get Revenge for loosing your Job.

A Company and all its Employees are Quarantined for 8 hours whist a 'Rage' inducing Infection has broken out in the building of a Law Firm .

Knowing the Rage Infection leaves you Free from Prosecution ,being that this Law Firm proved it in court previously in a Murder case .Anything goes without Guilt or Conviction for 8 Hours !

Management are Safely Locked in their Top Floor Offices as Disgruntled Ex Employee and Soon to be Evicted Tennant of said Company try to get upstairs to exact revenge before the quarantine times out.

Picture something similar to the 'Belko Experiment' but with more Humour

Mayhem exists in a world so clouded by corporate gains that when a virus breaks out in the office that turns everyone into murderous animals, there’s more concern about the bottom line than the loss of life. Even our protagonist who you’d think would be more about survival than office politics has his eye more on slashing the throats of the company elites than playing it safe until he is released from quarantine. But this is the world he lives within, where business strategies trump compassion when it comes to getting what you want. A massacre in this kind of environment isn’t a tragedy but an opportunity.

This mindset is kinda easy to understand given the character we follow. Derek Cho (Steven Yeun) has been trying to work his way to the top of the corporate ladder as a banking account executive. He hates the grind but has come to the cold realization that this is how things get done. There’s an ambition to his journey, as he notes the berzerk virus resulted in one of the infected murdering a co-worker and getting off free with a doctor’s note. So when Derek finds his office is under lockdown for eight hours while everyone is infected, he spots this as a golden opportunity to rise to the top and get his revenge on a corporate environment that has wronged him.

All of this would seem odd and absurd but not so much to our characters who are drowned withing such an office environment. The disease is only briefly mentioned by Derek at the beginning of the film more with fascination than fear. The first quarter of the film is spent in a stuffy office environment with quick cutting and snappy dialogue where Derek tries to untangle a web that is leading up to him being fired. He has nothing to lose, especially when he becomes infected and has the opportunity to kill anyone in the building for a short period of time. On his quest for chucking the corrupt boss of his company, he meets Melanie (Samara Weaving), a client just trying to save her house after the bank has screwed her over. She takes a lot more glee in their murderous adventure to the top of the skyscraper because she has been wronged most by this company from the outside, thus more smiles and laughs when watching corporate paper-pushers stab each other with scissors.

Mayhem features plenty of bloody violence and gore in the office, akin to The Belko Experiment, where staplers are used as weapons and heads are slammed in copiers. Unlike The Belko Experiment, however, there’s a bigger focus less on who will survive the carnage and what this says about a capitalist structure where money and status are more important than lives. There’s a very telling moment where Derek mentions how a cure for the virus doesn’t seem to be in the cards until it starts deeply affecting those at the top. There’s a dark realization about how nothing seems to work for anyone unless they attack the rich. Derek would not have found peace had he stayed in his office to run out the clock. Melanie wouldn’t have had her home saved if she didn’t force an executive to sign a document in a state of being threatening.

Directed by Joe Lynch, this film is spot on with its commentary and dialogue that doesn’t hide for too long behind the sophistication of business. When the chips are down, the grit and vulgarity fly as much as the blood and guys. The knowing nature is always present, however, where the film never loses sight of its bigger target to linger too long on a fun kill or a bitter rivalry that comes to a grim showdown. This film takes no prisoners and it’s an absolute joy to see an office horror film that finds more than fun stuff to do with memos when chaos descends on the cubicles.