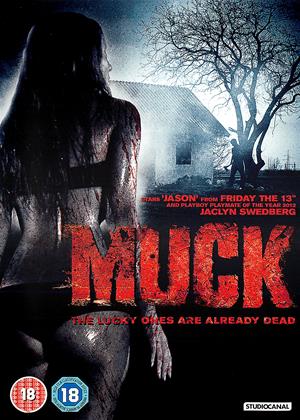 Perhaps it is novel for a film featuring such cutesy smart-arses to begin when the youngsters have already suffered some unspeakable horror and are searching through the night for sanctuary, because that is how this kicks off. We don’t know why the scantily-clad youngsters are in the middle of a woodland (even though it transpires they are actually seconds away from suburbia) or what manner of jeopardy they have suffered. Who cares? Not the people behind this bore-fest. After finding an empty house in which to shower and continue to drink (clearly these are prioritiues), the second male of their number (I’m not sure they even have names, although I heard one called Billy at some point) heads to a bar five minutes away to call for help, but gets side-tracked by yet more rampant girl teens.

A joke is attempted. When one teen says to another he’s ‘At Wes Craven (the name of the bar, I think)’, his friend says, ‘Wes Craven? Used to be cool but now … eeeeeeewww.’

Apparently this is a spoof of 1980’s horror ‘flicks’. But it really isn’t. There’s nothing remotely funny here, there’s no concept of story, no reasoning for anything, no pretence at the first level of making the viewer want to continue watching beyond the repeated lame nudity teases. It’s the worst film I’ve seen for a very long while and just exists to fill the running time with no discernible lack of talent on display (and yet it appears to be adequately budgeted and directed. Couldn’t the money have been spent on something else?) Even the special effects, never called on to do much, fail to convince, with only gurgling sound effects laid over the soundtrack to let us know that a gore scene is being attempted. More fulfilling to simply watch some straightforward pornography and miss out on the stilted, unfunny drivel in between repeated cleavage shots.