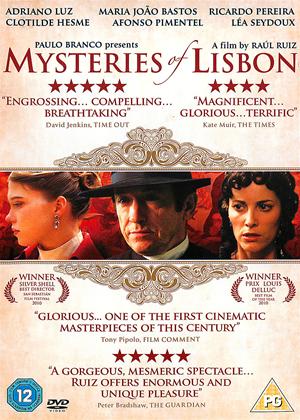 Reviews (1) of Mysteries of Lisbon

Elegant and intriguing - Mysteries of Lisbon review by SK

A wonderfully spacious narrative, with stories nested within each other and an satisfyingly enigmatic ambience.

It's master-class in camera movement,composition and pacing.

Worth trying to watch in one go to appreciate the cumulative effect and architecture of the complex narrative and keep the large gallery of characters in mind.

The late Raoul Ruiz, who passed away in August last year, has left behind a final artistic piece of cinema; Mysterio de Lisboa, a four hour epic in which a number of characters travel across Italy, France and Portugal.

Available as directorial cut that lasts a painfully long 266 minutes Mysteries of Lisbon is based on a novel by the prolific European author Camilo Castelo Branco. It is in many ways a Dickensian story of European society, in which the characters rise and fall in the hierarchy with s rapidity that makes the run time seem even longer.

Visually the movie is like an intricate tableau, the exquisitely dramatic sweeping shots framing the characters as if in portrait, whilst the period dress and set design are both intricate and beautiful.

Although Mysteries has a strong enough story and intriguing enough characters to last through to its final completion, which in itself is a self reflective strand that has entwined itself within the already complex interweaving of the main plot, I would struggle to call this a narrative film.

You find yourself swept up more in the visuals and tone of the piece rather than the personal relationships and outcomes of the story. Mysteries of Lisbon is by far more of an artistic piece, which makes the immense run time sit a little more comfortable with me as a viewer; the thought of four hours of narrative is daunting and rather off putting, whilst a deep and intrepid insight into the moralistic values of such a story as represented through it’s artistic visuals is interesting and captivating.