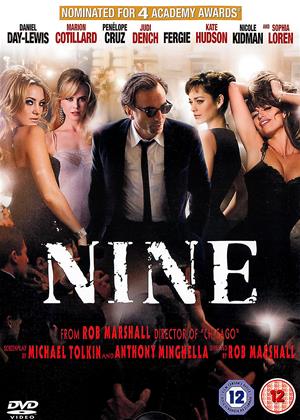 Sign up
The Cook, the Thief, His Wife and Her Lover

Musicals yikes save me - Nine review by D C

Its my fault i didnt notice that this film was slipped quietly into the musicals section as its genre after romantic drams so i do feel cheated but if you like musicals then give it a spin its packed full of hollywood actor types and also dame judy is always a good run for the money but kudos to mr left foot he sings and dances a bit which shows his diversity, but back to the film, must we i hear you say so ill wrap it up on that note!

I had a very poor expectation having seen some fairly bad reviews of this, but having an open mind and to be honest, not being a big musicals fan, I settled down to watch this. Wow, I was so impressed by the whole thing - the cast are perfect and all perform their numbers superbly. All of the songs are acted out in DDL's head (so different to say, Mamma Mia, where they are real) and take place in a film studio set, he is imagining all of these scenes as part of a new film ...he has writers block. For the songs they really push the boat out with the staging, costumes and choreography. Some great numbers especially Fergie's and Kate Hudson's and as for Ms Cruz ....phew... Okay, so the plot is maybe not that thrilling (but was okay for me) and maybe Nicole and Judi could have been used more, but for me, this is one of the best films I've seen over the past year and may end up buying a copy as the rewatch value is high. Extras wise, there are a few short featurettes which provide an interesting insight into the effort that went into the film (Kate rehearsed for 6 months and Penelope cried after her song was complete - it meant that much to her). I've not seen Chicago, which is suppossed to blow this away, but for me this was very entertaining and enjoyable. Recommended

I am amazed that credible actors like DDL, Dame Judy, and Marion Coutillard signed on to this. Perhaps as in Contini's film, there was no script for them to see. I felt no empathy for the lead character - a self-indulgent mess. The songs are repetitive and annoying - at least without the songs the whole film would have been over much quicker. If you have to watch it, do yourself a favour and turn the sound off, at least it all looks pretty!

DDL does very few films. He does not do them to be popular, or make money. When he does do one his focus is undeniable.

Lost quite a lot of money in the cinemas, which is not surprising, as not many folk up for a musical, but the sets and routines, and the acting, has to rate at least 3 stars for sure.

Who else could have acted the part?

I agree that, like Contini's film, this one didn't seem to have a script or a purpose. DDL's character is a thoroughly unlikable narcissist going through an existential crisis. He seemed to totally lack charisma and it wasn't obvious to me why women appeared to find him magnetic. The dancing was brilliant (Kate Hudson - who knew?) and Judi Dench was a revelation, but the photography was a mess and the editing abysmal.

A curiosity, especially as to why such good actors wanted to get involved in it. Not surprised it bombed.