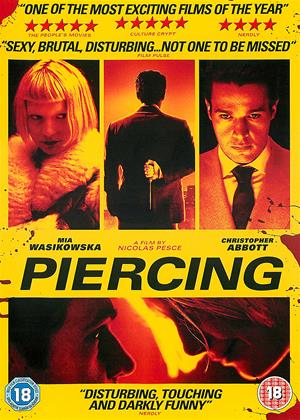 Synopsis:
Reed (Christopher Abbott) is going on a business trip and he's got everything meticulously planned: check into a hotel and kill an unsuspecting victim. Only then can he rid himself of his devious impulses and continue to be a good husband and father. But he gets more than he bargained for with volatile call girl Jackie (Mia Wasikowska). Before the night is over, a feverish nightmare will unfold, and Reed and Jackie will seal their bond in blood.
Actors:
Christopher Abbott, Mia Wasikowska, Laia Costa, Olivia Bond, Maria Dizzia, Marin Ireland, Dakota Lustick, Wendell Pierce
Directors:
Nicolas Pesce
Producers:
Antonio Campos, Josh Mond, Jacob Wasserman, Schuyler Weiss
Writers:
Ryû Murakami, Nicolas Pesce
Studio:
Vertigo Releasing
Genres:
Comedy, Drama, Horror, Thrillers

Sundance-style indie film-making at its worst. Long static close-ups of talking heads will soon have you switching off. It may be cheap, but it’s terminally boring. Godard made Breathless for next to nothing. Have modern indie film-makers learned nothing? It’s promoted as a thriller, but it’s too boring to be thrilling. Towards its end it adds some gruesomeness to make you pay attention, but that only makes it even more loathsome.

One needs a high threshold of revulsion to continue watching this film. Abbot is excellent, convincing and compelling but he is not enough to carry the whole film. It is a bizarre film that promises much but fails to deliver in the end.

Minus Star - Piercing review by JD

Cinema Paradiso need to revise their Star rating to accommodate this piece of utter drivel. I agree with Alphaville. Terminally boring but with added revulsion. How this got a comedy tag is beyond me. Then again takes all sorts?

Difficult to review this film as unusually for modern DVDs there were no subtitles. Judging by the other reviews, it did not look as if I have missed anything but it probably tells you a lot a out the film and distributors that they do not take into account people with physical impediments.

Didnt really know what to expect and as it started it looked a bit low budget and crappy but it was actually Very Clever and Brilliantly filmed.

Very Darkly Comic and rather disturbing . Twists and Turns ,Where will it go to next .

2 Damaged Souls Trapped in a Struggle with their Inner Demons and Playing them Out with Each Other .

Brilliant Movie, Well Worth Watching more than the once .

i think I may even Purchase a copy .

PS Bad Reviews below are from 'Formulaic Text Book Horror Lovers',that didn't understand the idea of Mental Illness and Inner Demons Taking Over your Life .

Enjoyed the novel but... - Piercing review by MN

this film adaptation isn't up to much, unfortunately. Spirited performances from both leads but ultimately unsatifying and too bizarre for its own good. And then... it ends, after 80 minutes. You should definitely watch Audition instead.