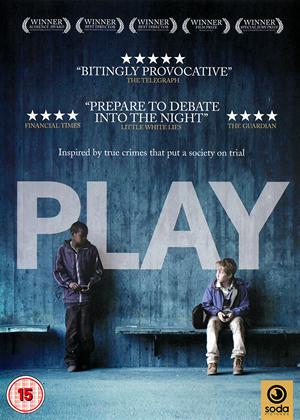 This is not an easy watch at all, so realistic are the characters and scenes of mugging. However, I am so glad this film was made - I doubt any UK TV or film company would dare, to be honest. It was painful to watch sometimes - like watching hyenas or wild dogs surround their gullible prey. It is all so menacing and nasty.

Anyone who has lived in London knows how endemic mugging and street crime is. People also know the demographic of those who do it - the same as in this film set in Gothenburg in Sweden, I believe. And the victims in London are the same as shown here too, In London this sort of mugging is called 'taxing' and is why so many kids after school will not visit shopping centres etc. I DETEST street crime and do not mind saying I hoped the vile nasty thug criminal muggers shown in the film were locked up for ever in secure units well away from us all.

At times this is like a documentary it is so realistic and all the child actors do so well in that.

Based on a true story apparently where muggers used power game psychology and the 'brother' trick to mug younger Swedish boys - I hope they got caught and punished appropriately, Probably not - this being liberal Sweden. The psychology aspect is interesting and nasty - the vile cruel muggers have no sympathy from me. I do not care about their age of ethnicity.

No spoilers but I liked the late scenes where pc dogooding women (it usually is) make excuses for the muggers by saying they are children and immigrants so we must understand them. That is SO true to life.I have worked with women like that! None have been mugged - I expect their opinions would change if they'd had to grow up as boys in London constantly under threat of mugging or attack.

The race issue is addressed here in a way no UK TV channel would - esp the woke pc BBC. One young mugger of colour says at one point "anyone dumb enough to show their phone to 5 black guys only has themselves to blame". Well it ain;t the Bill, for sure, where most muggers in sunny Sunhill fantasy land were white...

This being a Swedish films there is some arty flab which makes the film maybe 20-30 minutes longer than it should be.

But this is probably the best film about mugging, esp by black boys against white boys, ever made.