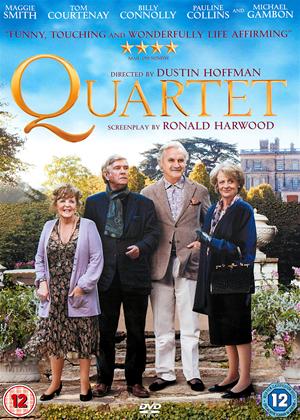 I was looking forward to watching this film - but it was so plodding, so predictable, so unbelievale in its plotting (the rap subplot), that I looked at my watch many times whilst I precicted (accurately) in the first minutes what would happen by the end - then ticked off my correct prdictable predications as they came true.

This movie has such a wonderful cast of British character actors - almost any old actor worth their salt took the pay-cheque for this one then!

And it should have been good - or better - with a fine writer like Ronald Harwood. Perhaps at aged nearly 80 he cannot see the sheer unbelievabiity and predictability of his screenplay (which is based on a theatre play, which was based on a TV documentary about a real retirement home for opera singers in Italy).

Sorry, but this gets 1.5 stars rounded up. As a movie with and for oldies, the Marigold Hotel one is far better than this.

Not quite a Beecham powder keg - Quartet review by JB

A very disappointing film, and a real waste of all the talent and goodwill the director had at his disposal. Poor writing, poor plotting, poor rhythm, poor everything. A real missed opportunity.

The only redeeming features were the music, and the performances of the (genuine) retired musicians. Everything else was as tired as a care home carpet.

So What? - Quartet review by Mehitabel

I watched this with a friend who has little knowledge of the theatre, and none of opera. I bigged it up on the grounds that, with Ronald Harwood as writer, Dustin Hoffman directing and such a huge cast of big-name British actors, it couldn't fail to be gripping..

You wait and wait and wait.. And then, nothing happens. And I don't mean in terms of plot or action, just development. I was thinking hopefully almost right up to the end "This cannot be what it seems.!" But no, it is exactly what it seems.

I wonder if Dustin Hoffman's clout enabled him to sign up all these big names and only then feel the need to wonder what to do with them. I rather wish, instead of adding one ageing superstar after another (and the fact of their age has nothing to do with the ploddiness of the film) to his cast, he had gone to directing school..

And the writing...! Since when did Ronald Harwood not know the difference between Eccentric and Irritating? Billy Connolly's character, in particular, is obviously made to use blue language just for the sake of it. Was it meant to shock us, or give us a frisson? - If so, it failed totally. He was just a bore.

In fact, that sums up the whole movie. As the credits rolled, my friend, trying to be charitable, said "I'm glad I saw that on DVD. I'd be feeling pretty cheated if I'd paid to watch it in the cinema!" I'm not so sure I'm not aggrieved at spending time on it at all, even on my own sofa. Note to producers: The mere involvement of luminaries like Hoffman, Maggie Smith and Michael Gambon does not automatically make a film good.

The only good things I can find to say is that the house is rather lovely, and Tom Courtenay hasn't lost a whole lot with age..

Based on a play by Ronald Harwood and directed by Dustin Hoffman Quartet is the story of a group of retired opera singers, all living in the same retirement home, whose annual fund raising concert and general peace is disrupted by the arrival of another aging musician, diva and ex-wife of an existing resident.

With a number of well known and respected British actors in the central roles Quartet offers a light, respectful and enjoyable portrayal of ageing; in which the inevitability of it is positioned against the inherent youth and vivacity of its current residents. Maggie Smith, a particular favourite of mine following her portrayal of Minerva McGonagall in the Harry Potter movies, is on fine form, as is her Potter co-star Michael Gambon in his role as the flamboyant director Cedric. Other performances, including those of Tom Courtnay and Pauline Collins are also of as high a calibre as you would expect from such distinguished actors, whilst Billy Connelly provides the comic relief as a sex-obsessed stroke victim.

Aimed at the ever increasing middle-aged generation Quartet is charming and light, providing an extra element of pleasure to the music lovers among us, and will appeal to those looking for something with a little more substance than last years aging comedy-drama the Best Exotic Marigold Hotel.