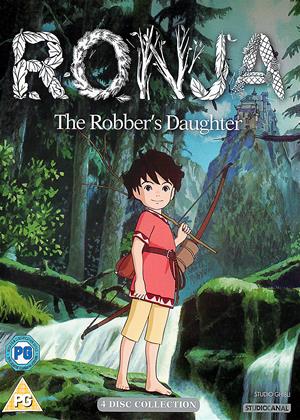 Reviews (1) of Ronja, the Robber's Daughter

Robber of time - Ronja, the Robber's Daughter review by MR

Big Ghibli fan on the whole and part of that is due to the slower pacing of the films compared to film-making in the West; however, this did not transpose well into a lengthy 26 part series. The middle third of this series really sagged and I struggled to maintain interest throughout. The series looked fantastic, but of course it is when it's being put out by arguably the greatest animation studio on the planet. The English dub was also let-down by some fairly hammy voice acting that I found really jarring, other than a delightful narration from Gillian Anderson. If you are a big Ghibli fan you will, like me, watch this regardless; however, it is certainly no starting point. For completisits only.

Hayao Miyazaki has always had a penchant for crafting animated films that hold up women as heroes. From his fantasy action picture of Nausicaa to his award-winning lost-world adventure of Spirited Away which shoved him out of retirement, most of his films carry a strong female influence. His son, Goro Miyazaki, continues that tradition with Ronja, a series that only perfectly reflects that rounded 2D style in CGI but also carries over the female hero trope with great charm and thrills.

The titular character of Ronja, as the title implies, is the daughter of a robber who grew up around a band of bandits. They reside within a castle set within Medieval Scandinavia with its vast woodlands. The bandits raise her as protectively as they can in such a wild world of crime and combat. When she’s old enough, Ronja’s curiosity spikes as she decides to venture out into the woods. And why wouldn’t she? The woods are filled with all sorts of magical creatures and astonishing wonders. There’s also much danger as well, leading to Ronja’s parents struggling to keep her safely in the castle.

Of course, Ronja finds far more than just spectacle in the wilderness. She discovers another boy amid nature by the name of Birk. He’s the same age as her, making him an easier friend to relate to than her clan of adults that lord over and struggle to connect. Ronja and Birk hit things off relatively well, discovering they have quite a bit in common. It turns out they have too much in common, however, when it is discovered that Birk belongs to a rival clan. How their friendship can remain with such a rivalry between their families may be a tough trial for such a young boy and girl.

Though the Ghibli films of traditional animation always felt wonderfully fluid, this CGI series cut a few corners more common to television anime. The movement is a bit stilted, relying on fewer keyframes to keep the animation less complicated. This is a technique that was actually more common for the early TV anime of the 1960s, where keyframes were pushed back on gags and actions that typically required much more. Thankfully, as with most anime on a limited TV budget, the team behind this CGI has done their best to ensure that Miyazaki trademark of character design and exaggeration is present throughout. Though seeming a bit off at times, sparks of that Ghibli attention to detail can be seen throughout that one can easily become accustomed to this style in due time.

More importantly, Ronja has a whimsy of character and fantasy that never loses sight of either in its animated adventure setting. The chemistry between Ronja and her bandit family is cheerful and eccentric, bubbling over with quirkiness that usually oozes from most playful Ghibli films. There are some thrills and excitement throughout but most of it is kept in check to be more suitable for kids than say the far grim and tougher topics of historical feud present in Princess Mononoke. Think more Kiki’s Delivery Service with some dashes of Nausicaa throughout.

Goro Miyazaki stated that the goal of the show was to be a pleasing dose of entertainment for kids and their parents. And I think Ronja more or less hits that mark. It’s playful without being to child-like and sweet without being to surgery to make the adults gag. The amount of wholesome may vary per family but that sense of wonderment that the Miyazaki clan concocts so well certainly hasn’t lost its touch when placed within an animated series.