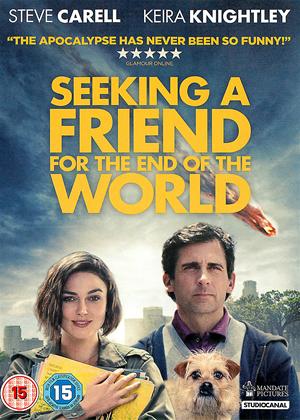 Reviews of Seeking a Friend for the End of the World

A movie I really didn’t expect to like Seeking a Friend for the End of the World tells the story of an insurance salesman and the last 21 days of his life after the mission to destroy a 70 mile meteor headed for earth fails. Yet the narrative and cast involved in this movie are really the least important or interesting aspects of Seeking a Friend and as such I will skim over them quickly; Steve Carell (who I love) and Kiera Knightly (who I hate) star in the lead roles as Dodge and Penny.

From the writer of the captivating teen rock and roll tale Nick and Norah’s Infinite Playlist comes Seeking a Friend for the End of the World, a touching, thoughtful and hugely enjoyable film that explores the final choices made by a selection of humanity when they discover they only have weeks left to live. Dodge an unhappy insurance salesman opens the film as he and his wife first hear the dreadful news, whilst stopped in their car on some unknown road. Upon hearing the news Dodge awkwardly voices his concern that he’s missed their turning, his wife then takes a final look at him gets out the car and flees into the distance. This is the last we see of Linda.

From here Dodge meets the first of his unlikely companions; a small stray dog who seems to have been abandoned by his owner. My hard hearted exterior made the firm decision at this point that the only character I would care about from this point on would be the dog, aptly named “Sorry”. But despite my dislike of Knightly soon after she and Dodge begin the journey to find Dodge’s high school girlfriend Olivia (the one that got away) I found myself warming to her character and the relationship that develops between her and Dodge.

Really from this point on very little else happens, there are a couple of comedy moments including a trucker (C.S.I’s William Peterson) mistaking Dodge for a hit man and a cop who doesn’t seem to be taking the end of the world too seriously; and several absolute heart wrenchers, including a beautifully shot scene in which Dodge and Penny have a meaningful conversation between the bars of their separate jail cells; but to dwell on the narrative would not do this movie justice.

The plot for Seeking a Friend simply provides a vessel through which the script and screenplay and explore several fundamental quandaries of human existence; love, loss and the fear of the unknown/future. The fabulously quirky characters, stunning soundtrack and unexpected yet wonderfully apt ending all combine to make Seeking a Friend for the End of the World one of the most enjoyable films I have seen this year. It may not be grandiose, highly philosophical or even a masterpiece of directorial or acting performance, but it is a movie that touches you right deep inside and even pulls out a few, unexpected, tears at the end.