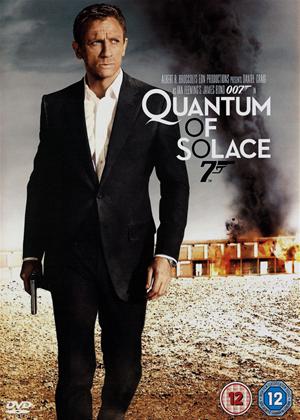 Reviews (4) of Quantum of Solace

My expectations for Quantum of Solace were high upon release. After the excellent Casino Royale - a film so good it attracted new fans to the Bond series - could things get better? Being set only a few hours after the end of Royale was an interesting move along with the promise of a more personal Bond. In reality we received a blitz of rapid editing, odd camera angles and a shallow plot. Solace looks stunning but the director clearly has been watching the Bourne films on high speed. Warning this film can give you a headache! And its such a shame with Olga proving to be a match for Bond and the casting of Mathieu an inspired choice. After his brilliant turn in the Diving Bell & The Butterfly, here was someone who could make a memorable opponent. Instead, thanks to the script, Bond finds himself up against nothing more than a powerful corporate accountant.

6 out of 12 members found this review helpful.

Casino Royale was just what Bond needed, a fresh new interpretation, and casting Daniel Craig in the lead was inspiring. Bringing a whole new league of fans both male and female into the Bond fold. My 80 year old mother, who was already a fan of the Bond franchise, especially Sean Connery, was on the edge of her seat, enjoying the thrill of the ride in Casino Royale. A breath taking journey from start to finish.

So with the much eagerly awaited sequel, Quantum of Solace, what went wrong? From the start this is a badly directed, shoddily edited piece which is allover the place. The film is hard to follow, not because of the what is a very simplistic plot, but because the filming is all over the place. The action is virtually non-stop, but is so fast, that your eye doesn't have time to take anything in, editing is very choppy and as a result it is just all over the place. Daniel Craig, looks like he is bored and shows nowhere near the drive or enthusiasm he had in Casino Royale. The bad guy is dull and badly cast, he looks more like he should be presenting childrens TV, than in world domination. And whilst the rest of the cast try, they have nothing to work for.

Bond carved a niche with it's gadgets, technology, sexy girls, witty one-liners and of course suave lead actors. And of course no Bond film was complete without its main title song, one that actually had the film title as it's title or at least sung in the chorus. There hasn't been a decent Bond song in my opinion since Tina Turners 'Goldeneye' or Madonna's 'Die another day'. What have the last few songs been called or how did they go, haven't a clue! And this makes the films themselves less memorable.

I have not heard anyone, even die hard Bond fans say anything good about this film, this has done so much damage to the Bond future, so let's hope that the next one manages to salvage the remains from the ashes.

I was pretty disappointed with most aspects of Quantum of Solace, from the storyline (which was pretty hard to follow) right though to the action (which was not as great as usual).

If you are a massive fan I do not think you will be happy!

Before Casino Royale, James Bond was on lift support. The truly awful Die Another Day had taken Bond and, despite a great opening half an hour with a genius premise, (Bond is imprisoned and tortured whilst on mission, then when freed has to build himself back up again and prove he is relevant and needed in the world he goes back into,) turned 007 into effectively a walking cliché. As mentioned in another review, Jason Bourne's biggest ally with The Bourne Identity was Bond becoming redundant in Die Another Day.

Then along comes Casino Royale which not only revolutionised Bond but emphatically stated and proved that "Nobody does it better." And these words, taken from The Spy Who Loved Me, whilst before thrown around with some sarcasm and triteness, finally had emotional heft and really were the best description.

After Casino Royale, excitement was at fever pitch for what would come next. And whilst Quantum of Solace/QoS is not a bad film by any stretch of the imagination, the worst thing I can say about it is that it is not a "Bond" film, so all of that effort and achievement so hard won by Casino Royale feels like it is at times been for nothing.

QoS does have lots going for it. Marc Forster, who proved his worth at getting incredible performances out of actors in Monster's Ball, (including guiding Halle Berry to her Oscar,) using the enormous budget to make sure everything looks incredible. And there are some very nice cinematic touches in between events which add some gravitas to the film. The locations are stunning, cinematography beautiful and David Arnold again provides a brilliant score. But that is basically where the good points end...

By far the worst thing about QoS is it is basically what a movie would look like if you took a large number of action scenes, combined with the usual action movie staples (meeting in office, bar scene, love scene, final scene where everything comes full circle,) stuck them in a mixer then put the result on a screen and called it a completed film. It really is a mess of massive proportions. Characters are introduced long enough to be given a minimal back story, then killed off and never spoken about again. The film, trying to convey to the audience the fast moving nature of what could be charitably called a story/script, decides the best way to do that is to quite simply do everything at 5 times the normal speed. The editing is absolutely awful, but you get the real feeling that the director/producers feel that this is the best way to tell this story.

The story itself is very basic in terms of what actually happens, which in many action movies is all that is needed. And to me this is the nutshell of the problems: This is an action movie, it's not a Bond movie. If this was an American studio production where an A-List actor played a secret agent being chased around the world with a budget to match, this would be a 4 star film. But when it is Bond and you have the higher expectation along with the traditional franchise staples, the ground shifts.

People like me who love Bond love it because it IS more than stupid action film schlock. We love this character of Bond, complete with his failings and nuances, alongside being able to walk into any bar in the world and the barman knows his name and how he likes his Martinis, despite him being a secret agent. Whilst some will scorn this, to Bond fans this is our nirvana.

So whilst QoS does try to be something different, like Casino Royale did, it departs so far from what the vast majority of viewers want that in the end it loses any feeling of "Bondness."

And weirdly, the final thing to say is that despite all the action scenes, in many ways it is actually quite boring. Once you lose interest in the story, the frenetic action scenes lose all their heft. And no Bond movie should ever make you feel that.