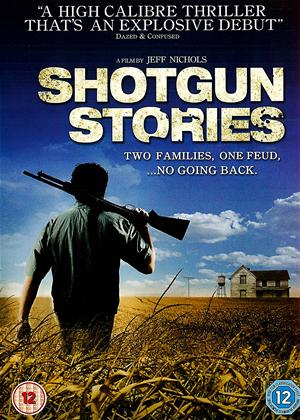 Sign up
Ghost Dog: The Way of The Samurai

A gripping family drama about the futility of revenge. - Shotgun Stories review by CP Customer

Set in the small town of England, Arkansas, ‘Shotgun Stories’ follows a bitter feud between two sets of half-brothers after the death of their father Cleaman Hayes. Son, Boy and Kid Hayes are the three sons of the Cleaman’s first marriage. Estranged from his wife and child, ‘Son’ the eldest of the three, earns an average living as a fish farm worker, ‘Boy’ the middle brother lives an aimless existence living out of his van and spends his time coaching a small group of local boys at basketball, and the youngest brother ‘Kid’ sleeps in a tent in his eldest brothers back yard and hopes to marry his long time girlfriend. After their mother arrives at the door of Son’s home to tell them that their father is dead, the brothers turn up uninvited at their father’s funeral and hear a eulogy describing him as a productive member of the community and decent man. Son decides to speak up and tell Cleaman’s present family of an alcoholic who abandoned his first family and left them to be raised by a mother who he describes as a ‘hateful woman’, and then acted as if they were never born. Brought up by a father who their mother describes as a different man back then, the other Hayes brothers Cleaman Jr, Stephen, John and Mark have enjoyed a stable family life and have steady employment on the family owned farm, but riled that the other Hayes boys have tarnished their fathers name it’s soon known around town that revenge is on the cards. Jeff Nichols excellent film is a gently paced tale of a simple feud in which neither party is the root cause and which foolishly escalates out of control. The film cleverly avoids being a typical revenge movie by concentrating of the main characters and the mundane existence of their day to day lives and when there are acts of violence and conflict Nichols skilfully cuts away into a more gentle scene showing the outcome. The look and feel of the movie is almost identical in style to that of the film’s producer David Gordon Green’s earlier work like ‘All The Real Girls’ or ‘George Washington’ where scenes are set between artistic shots of the surroundings. The direction, cinematography, soundtrack, acting and story are all nothing short of suburb. Profound, poignant and haunting, if you’re looking for a good quality indie with masses of depth then it doesn’t get much better than this.

One of the best films I've seen this year, Shotgun Stories is a lowbudget indie from the States that lacks any urban reference points. Instead set in the countryside it reveals the conflict between two sets of brothers when communication breaks down.

The title is somewhat misleading, as while guns feature in this culture, this isn't gun-fest with revenge high on the agenda. So passions do run through the film, but its more about each side and trying to bridge the gap before it all too late. I enjoyed the pace and setting of the film, despite the emotional anger in many scenes it maintains an calm, laidback atmosphere. Very impressive.