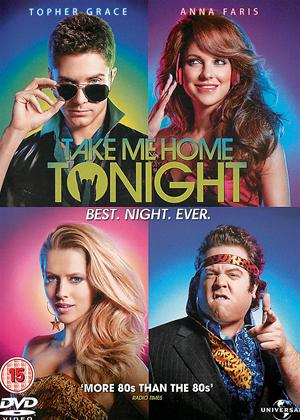 Reviews of Take Me Home Tonight

Inspired by the Eddie Money song of the same name Take Me Home Tonight tells the story of a recent college graduate as he tries to decide what direction to take with his life. After graduating he has returned home to work at a video store, where one day he is invited to a party by the girl of his dreams. From here the film takes a bizarre turn, the ensemble cast taking many different directions, morally and attempting to raise questions about impact of love, drugs and peer pressure on the decisions of young adults.

The release of the film was held back by Universal Studios due to its controversial depiction of cocaine abuse.

Set in the 1980’s as is the current fashion at the moment, the movie follows Matt (Topher Grace) as he courts Tori (Teresa Palmer) the girl of his dreams, whose attention he has only caught by lying about where he works. In many ways the film had the opportunity to be the teenage Wall Street, taking a look at the 80’s ethic and economy; however it misses this opportunity and is little more than a romantic comedy.

Even by rom-com standards the film is unimpressive, the script clever enough to keep you interested but the film is overwhelmingly predictable and the characters pretty irritating. Topher Grace is the star of the movie, being both charming and lame in the way that romantic leads inevitably are, however his presence exceeds the character he plays.

Retro inspiration aside the film lacks any real substance, other than the cocaine that is being thrown around, and failed to produce the wit and originality that had been promised while the film was shelved for four years. The ending is cliché and clearly meant to inspire, but instead leaves you feeling a little claustrophobic.