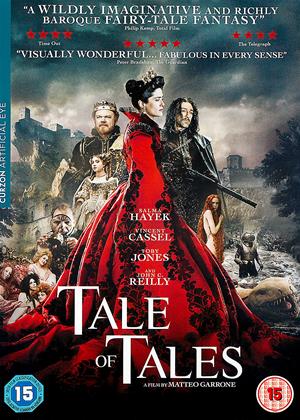 Reviews (5) of Tale of Tales

A stylish bore - Tale of Tales review by AK

I had really wanted to see this when it came out, because the reviews made it sound so great. It certainly looks brilliant - great use of scenic locations, great costumes, beautifully filmed, and boasts some fine performances, but....much as it tries, much as it perambulates, digresses and spins its tales, it doesn't actually go anywhere or do anything. All the interwoven stories seem flat and uninvolving and tend to peter out towards the end, leaving me to merely shrug with a "Meh" at their conclusion. There are no twists, no morals, no compelliing narrative pull, just a procession of events badly copied out from a child's book of fairy tales. Honest, Terry Jones' short stories had more punch, pizazz and power than anything on display here. It goes on for far too long and ends with a lovely image that just elicited a heavy, weary sigh from me. Very, very disappointing.

This is one of those films that must have been more fun to write and make than it is to watch. It consists of three interleaved but independent fairy tales from a 17th century Italian book and is sheer nonsense. It’s directed by ex-painter Matteo Garrone, so any production still will look good, but as a whole the film has no more life than Peter Greenway’s painterly 1980s films. Yes, it’s just a silly fairy tale so we shouldn’t expect too much of it, but Branagh’s Cinderella showed you can still make an audience care. Here the characters are cyphers and the plot paper-thin ludicrous.

Garrone has an eye for an arresting image and the film has impressive production values, but characterisation, narrative thrust and subtext are so simplistic that the viewer has no reason to care. One story, for example, is about a princess forced into an arranged marriage. Yawn, yawn. In the DVD extras Garrone sees the film as ‘an emotional journey’. In which case he’s failed completely. One star for the pretty pictures. Best fairy-tale picture remains Ridley Scott’s magical Legend, but only in its American release version with Tangerine Dream score.

the odd good bit here and there, but a mish mash film that never really gets going. The reviews online are pretty good, which I don't understand at all. The reviewers must have watched terminator by mistake.

Was looking forward to this movie, but it was total rubbish, confusing over the top, could not understand what was happening most of the time, it was so bad I turned it off before I was evan half way through it.. yes rubbish :-(

Ok not great - Tale of Tales review by mb

Amazing location and costumes. Stories Ok-ish at least originals not Disney style. I had the feeling that towards the end they ran out of time and interest and just decided: “Ok let’s end it here”.