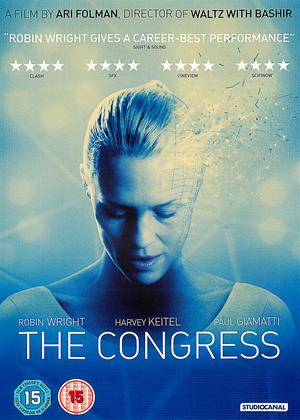 Reviews (3) of The Congress

Pompous and incomprehensible tosh - The Congress review by IKM

This is an absolute train wreck of a film: a slow motion collision of half-formed ideas, dialogue composed almost entirely of pseudo-philosophical non sequiturs, excruciatingly hammy performances, and a visual style utterly unsuited to its modernist pretensions. It pays lip service to a satirical feminist critique of the film industry in its opening scenes, but Folman is seemingly incapable of keeping an idea in his head long enough to develop it into anything meaningful and it comes as no surprise to discover as this travesty of a film unfolds (or rather, unravels) that its politics are every bit as superficial and idiotic as its philosophy.

The musical score by the wonderful Max Richter is the only redeeming feature (though what induced an artist of Richter's stature to involve himself in this tripe, I can't imagine).

The congress - The Congress review by ag

This could have been a moderately good film based on an idea that is worth exploring, albeit not new. However it loses the plot, and more importantly. a really bad directorial decision that ends up ruining the film.

Note: don't read ahead if you hate spoilers, but to be honest this film was spoilt way before I got to it.

Half way through the film the main character immerses herself in a virtual reality. Fine, except this one is hand-drawn Loney Tunes style cartoons. For 5 minutes this is disconcerting, but tolerable, after 10 minutes it is beginning to get very annoying, after FORTY FIVE minutes you are staring speechless at the screen, wondering when the nightmare is going to end.

I sat and watched this film all the way through only out of a kind of horrified fascination to see if it would stay as awful all the way to the end. It did.

It is not creative or imaginitive, it's just bad, to a degree that will hurt your eyes and your brain.

Truly one of the worst films I have ever seen.

The Congress is a bizarre hybrid of a two-parts live action movie that don’t quite work as well as (I’m guessing) the director envisioned them, and one part 2D animation that’s actually trying to be the masterpiece it never became until its beautiful and cathartic ending.

In the beginning, we’re presented with a simulacrum of worlds occupied by actors, with space semiotics built to resemble their lives, or the decadence of a Hollywood fame over the years in the business, Robin Wright in particular. It’s eerily strange how The Congress transfers its emotional meaning to the audience without explicating and naming those emotions and from the introduction of Robin’s son (Kodi Smit-McPhee) and his illness onward, it becomes perfectly clear the movie’s characters will eventually experience a tragedy in their own worlds they inhabit, a poetic one indeed. With its many self-references, the movie migrates towards a visual and emotional transmutation which will later culminate in a form of a liminal 2D animated adventure. In the narrative background, Robin’s Swansong inhabits the invisible parts of the narration and symbols which’re clearly used to personify her inner conflicts, as she’s presented with a binary choice of ontologically ending her career (by selling her acting self), or choosing to stay in the business and continue making one bad decision after another.

After Robin’s choice insecurely sinks into acceptation, we’re witnessing Harvey Keitel’s demonstration of a theater-like performance that pulls the wholesome experience out of the viewer for a moment, which is not so bad for a movie mimicking a real life mimicking a post-apocalyptic simulacrum of Raphael’s The School of Athens’ equivalence of a cartoon reality.

45 minutes in and things go awry: after a Faustian deal’s being made, Robin inhales an ‘ampule’ and the real world transforms into an animated Miramount (Miramax + Paramount) studio’s paradise, a glimpse into director Ari Folman’s already approved visionary inner ecosystem which hosts an overabundance of colors, mythical characters and oneiric appearances of hybrid flora and fauna. If for some reason you lost track, try to remember Cool World, Space Jam and Who Framed Roger Rabbit among other films, or as Robin herself puts it in the movie: “It’s like a genius designer on a bad acid trip” which kept my eyes stuck on the screen as soon as it lasted, I might add.

Animated Robin’s exploring some deep philosophical stuff about immortality (staying forever young) while deconstructing the perennial existential dilemma of who are and how can we tell apart illusion from reality from animation. Her (animated) character pushes forward the whole experience, but I’m personally fonder of Danny Huston’s almost fascist-esque portrayal of a Devil figure embodied in couple of characters throughout the movie, as to provide ‘evil’ counterweight to Robin Wright’s ‘angelic’ appearance.

But, as the animated story unravels, the ambiguity of it all gets suddenly interrupted by the interpolation of the second live action bit, which, instead of amalgamating with everything happened by far, it just doesn’t fit in the whole picture, pulling viewers yet again from an otherwise immersive escapade.

Everything considered, The Congress presents itself as a good live action movie, an extraordinary animated feature and a conflicting hybrid of both in its 2 hour 2 long runtime.