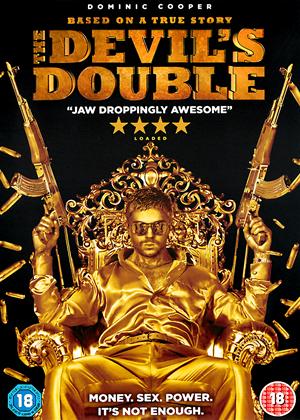 Synopsis:
Baghdad 1987. Latif (Dominic Cooper) is taken to see his former schoolmate Uday (also played by Cooper), eldest son to Saddam Hussein. Latif is told that a great honour has been bestowed upon him: because of the great likeness between them, he has been chosen to be Uday's body double. Trapped, tortured and fearful for the safety of his family, Latif has no choice but to comply.He is forced to become part of Uday's hedonistic world of gangsters and pimps where sex, money and power are not enough - an experience which he almost pays with his life on more than one occasion.
Actors:
Dominic Cooper, Ludivine Sagnier, Raad Rawi, Philip Quast, Mimoun Oaissa, Khalid Laith, Dar Salim, Nasser Memarzia, Mem Ferda, Pano Masti, Akin Gazi, Stewart Scudamore, Amrita Acharia, Elektra Anastasi, Amber Rose Revah, Selva Rasalingam, Samson Leguesse, Sarah-Lee Zammit, Ben Shafik, Frank Tanti
Directors:
Lee Tamahori
Writers:
Michael Thomas, Latif Yahia
Studio:
Icon
Genres:
Drama
Countries:
Belgium

Reviews (3) of The Devil's Double

Poor film, but Dominic Cooper just about lifts it out of mediocrity - The Devil's Double review by RP

Set in Iraq at the height of Saddam Hussein's regime in the late 1980s / early 1990s and his invasion of Kuwait, the film tells the (supposedly fact based) tale of Latif Yahia, who claims to have acted as the body double for Uday Hussein, Saddam Hussein's psychopathic eldest son.

The storyline (such as it is) covers the selection of Latif, his coercion into the role by violence and threats of torture to his family, his observation of the debauched, power crazed, drug-fuelled, sadistic, violent life of Uday, his affair with Uday's woman, his escape from Iraq and his return for a failed assassination attempt. Lots of violence, lots of f-ing and blinding, assorted crudity and nudity. Err, that's it.

Frankly, it's a poor film which is lifted out of mediocrity by the central acting role of Brit actor Dominic Cooper who plays both Latif and Uday. My criticism here is that he plays Uday in such an over-the-top manner that, whether or not he was like this in reality, it seems unrealistic. It does however provide an atmosphere of smouldering violence and unpredictability bordering on insanity that may be true to life.

None (?) of the women shown appears Iraqi - indeed, the country appears to be populated entirely by Westerners, all speaking English with a bogus middle eastern accent.

This was a gripping and excellent film, Dominic Cooper was excellent playing Latif and Uday. Wish I'd seen the film earlier but the reviews were only mediocre which doesn't do the film justice.

Shallow and dull - The Devil's Double review by Tim from London

An exceptional performance from Dominic Cooper fails to save this disappointing film. It glories in the horrors of the Saddam regime while pretending to disapprove. None of the characters are developed and remain one dimensional. In particular Sadam and the girlfriend are dreadful. Consequently the film is under developed, becomes very dull and predictable, and has nothing whatsoever to say about for example the nature of evil or the Iraq regime. I dread to think what it would have been like without the fine central performance from Cooper.

The movie stars Mamma Mia hunk Dominic Cooper of all people, as the body double of Uday Hussein, who he also plays. Cooper’s character, Latif Yahia is forced to act as Hussein’s political decoy and soon learns that Hussein, like his father, is a violent, power hungry psychopath.

Based on the true story of Yahia the movie is disturbing and sickeningly violent and it is incredibly bizarre to see Cooper in such a role. To his credit Cooper demonstrates that he is definitely not just a pretty face and has the power to really drive the plot and play both sides of the character. Yet the movie’s subplot ultimately lets Cooper down, predictably Yahia finds himself falling for Uday’s mistress and a romance blossoms between the two. This part of the narrative seems contrite and sends a ripple throughout the rest of the film making you question the accuracy of the piece as a whole.

Despite the film’s huge narrative flaw and unrelenting violence Cooper’s performance is certainly worth a look as he goes far beyond anything Abba could possibly have imagined.