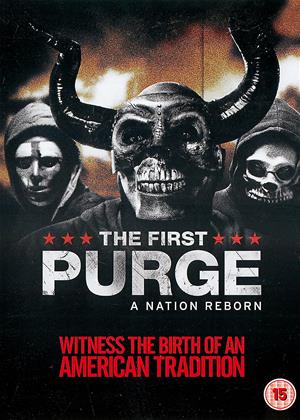 Reviews (6) of The First Purge

I have watched previously all the films of the purge series but none of them is as racist and anti-American as this film.

The story takes place in Staten Island ,a place which has been chosen to become the host of the first purge. So far so good.

The film depicts that Staten Island is mostly inhabited by ethnic minorities (especially African-Americans) who have decided to stay in the island during this first purge in order to get the 5,000 $ participation prize. Apparently most or all of the white people have left the island because they have no need for this money as they are so privileged. A lot of non privileged people, with anger and hatred issues, decide to take part in this experiment and we see them at the beginning of the film lining up to sign for the purge. However the night does not become the success the government was hoping for since most of the people decide to go for dancing instead of purging. So the government sends in a number of KKK and mercenary teams (obviously all of them are white) to kill the good people of Staten Island.

However the heavily armed KKK teams and neo-Nazi mercenaries are wiped out by the good (black) people(their leader is a druglord). It is a disgusting film full of racist propaganda and no value whatsoever. I was very disappointed and will most certainly give up watching any further films of the series.

Not bad - The First Purge review by sw

Im a big fan of the purge films. My favourite been the 2nd. I like the way all the films have a different story line while still keeping the main theme.

The first purge is no exception. If you like the others im sure youl like this one, lots of action and chasing with a decent budget.

Its a good prequel as prequels go, but Id say its my least favourite though, its been made by all the same people but this one felt like some of the scenes were making it about racial stuff which the purge has never been about so that seemed a bit weird and the way some people behaved in it seemed unreal but then all films have that i suppose lol

If your a purge fan then its worth watching.

3.5 stars for Trumpisms - The First Purge review by CS

If you've seen the other Purge films you'll know what this is about, but it does provide an interesting backstory to the origins of the

event in a story that has some uncomfortable parallels with what is going on today in terms of the resurgence of extremism in the USA. This is not high brow cinema but it is entertaining enough and worth a watch for sure if you enjoyed its predecessors.

It is notable that ALL the Purge Movies show Black Characters as the Victims and Upper Middles Class Whites as the Evil side. and in a way that is pretty accurate in life when we are talking Poverty in City Areas and Run Down Buildings . Trump makes this very clear with every word he utters.

Though it is Hard to swallow that the Only Hero they could come up with for this movie, for us to Support against the Evil Tyranny of the Governing Body putting the Purge into Place was a Drug Baron and Gangland Killer .

Not the Best in the Series and possibly the Last as I cant see the Audience staying interested after this one.

Entertaining enough, just a little lacking in any real Hero .

Purge this film from existence - The First Purge review by TH

This film is terrible. I really liked the first film and the 2 sequels that followed were watchable. However this film is dull and pointless. There wasnt really a need to make another and should of stopped at 3.

Good addition to the Purge Collection. - The First Purge review by AC

Enjoyed this film. As further as prequels go, it pretty much tells you what you need to know, as in the background to the previous films. Some may be offended, middle class whites thinning out the population via the impoverished/ black population! I think most would probably have guessed by now where this film was going to go?... It's a film.