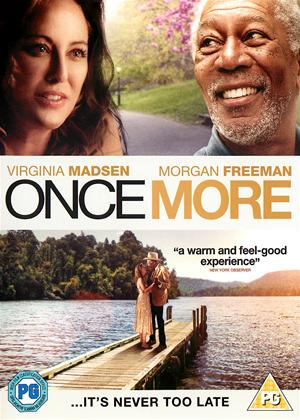 Reviews (1) of Once More

A slight, feelgood, romantic movie - Once More review by PV

This is a nice but slight feelgood romantic movie - and nothing more. It has pretty scenery and is undemanding.

Morgan Freeman is great as usual - but I simply did not believe a 60+ black man would have spent his life writing Western cowboy novels. I suspect it was written for a white actor.

Also, like most movies where characters are serious alcoholics, Freeman seems to drink bottle after bottle of whisky with no ill effects - no hangover, no shakes, no puking, no illness. Ridiculous. Watch Leaving Las Vegas to see the reality.

But it's all so-so and smug upper middle class wealth New Yorker holiday style, so it is what it is.

There isn’t much to Once More, hell its a film people have seen time and time again with a story people have read or watched over and over but there is something new about it as well and that lies in the wonderful performances it hides within. Not only does the film have a great lead in Morgan Freeman but he is joined by a exceptionally talented group of young actors you should look out for in the future.

Once More follows Monte (Freeman), a disgruntled western writer who is having problems writing as his life is slowly coming to a close or so he thinks. When his nephew pushes him to go spend a summer in the quiet location of Belle Isle he finds himself bonding with Charlotte (Virginia Madsen) and her three children even though he wanted to remain isolated and alone. Across the course of the summer he finds new ways to live while he contemplates writing again.

The parts of Once More that shine brightest despite a pretty conventional story of finding oneself through others is how it manages to make its visuals work with each of the individual themes of the film while also giving off this warm and emotional feel to each and every scene. Sure Freeman is excellent as Monte but the way the film is shot adds more depth of emotion than some of the performers.

Not only that but the film lets its actors breath with a script that is delightfully coy in the way it deals with its story as you must make your own decisions and choices of whether to like or approve of Monte and his actions. Not only does the script give its performers plenty of room to play it is also subtle in its themes and it never plays its hand too early leaving key moments to percolate just enough to make them important. All in all this is a terrific family drama you didn’t know about and probably should.