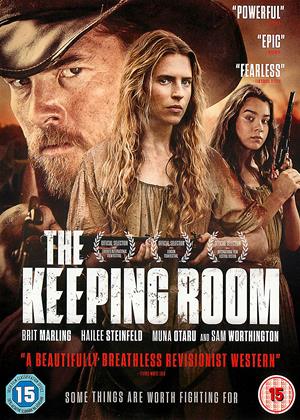 Reviews of The Keeping Room

The Keeping Room rests upon strong female leads and nice cinematography of rural America during the near-end of the Civil War, elements which unfortunately, cannot carry the movie long enough so that it doesn’t break under the pressure of its own slow pace and mediocre execution of a somewhat interesting premise.

Straight from Harry Brown’s director Daniel Barber we have The Keeping Room, a western-like story about two ladies and their slave girl, who try to survive under the harsh conditions the plains of an almost fully-barren American soil offer. Never mind scarcity: matters get even worse when two Union soldiers threaten to unlawfully jeopardize the girls’ lives and aggressively seize their property. Husbands are absent, so that leaves Brit Marling, Hailee Steinfeld and Muna Otaru’s characters to use their own wits in order to defeat the incoming intruders.

The race relations in 19-th century America are executed flawlessly. Mad, the family slave, is everything but close with the sisters. However, as narration nears its peak, we learn about her past and start to sympathize with her pains the most. She even gets to counter one of her owners and slaps her back in furious retaliation. Therefore, it’s safe to conclude that Mad is the main narrative vessel that carries the film’s momentum forward, however slow that may seem to be.

The second issue Daniel Barber raises is that of gender roles in our not-so-distant western societies, and again – it executes said issue rather satisfactory. The sole fact of this being a western driven by female leads speaks volumes of the message it’s trying to convey. And, to further push our point – perhaps Julia Hart's screenplay is what’s to blame for the subversion of genres. Thanks to her, instead of fancy prostitutes in clichéd western brothels, we get developed female characters that fight for what they think it’s right.

Now, with all that being said, the narrative structure still falls short from developing any kind of emotional connection with the audience. Instead of caring about a certain outcome, we’re indifferent as to what will happen next and this is a sin mostly aimed at the movie’s awfully slow pace.

There’s also a dichotomy between the first part when character relations are being established (which drags out a lot), and the second one during the home invasion. It seems as if the invasion part is disproportionately represented in a movie that’s not very tight on structure. This makes for a questionable pace and one ponders if cutting out most of the introduction will actually make a difference upon the affair as it is.

All taken into consideration and The Keeping Room is an average piece, with great acting and some interesting issues superimposed over a mediocre story and an awfully slow pace that undercuts the viewing experience by quite a bit.