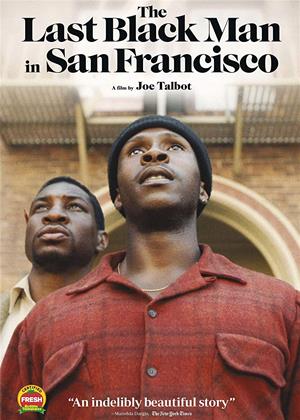 Rent other films like The Last Black Man in San Francisco

Reviews of The Last Black Man in San Francisco

Within the first scene of The Last Black Man in San Francisco, we see a little black girl staring at a man in a radiation suit picking up trash. Before we’re given enough time to comprehend what is being said with this scene, a street preacher announces it. He screams furiously in the middle of the road about how unfair the world seems when riddled with poverty and environmental problems. As he hollers, two black bystanders observe with a mixture of amusement and curiosity. They question if such a person rehearses his speeches ahead of time or if they’re made on the spot. By the end of the film, they’ll understand his bitterness a little more.

Few films tackle the desperation within gentrification with such brilliance. Whereas last year’s Blindspotting to took towards the changing neighborhoods with a certain bubbling bitterness, this film is far more operatic and somber in its subject. The two characters we follow are Jimmie (Jimmie Fails) and Mont (Jonathan Majors), both living in the poor and desolate Bayview-Hunters Point, San Francisco. They travel through down and notice the big differences happening around them. In their lesser neighborhoods they skateboard through, they notice a lot of black people cavorting and looking down on their luck. As their travel progresses to the richer part of town, they are met with sneers from white people. Perhaps even a few crazy white people that take off their clothes.

For Jimmie, the city has changed greatly and not just because the water is tainted and bearing fish with too many eyes. The house that his grandfather once built is no longer is. It belongs to an aged white couple. Aiming to preserve the memory, he often sneaks up when the owners are not home and put some work into the house. He notices the window trim is off and proceeds to paint it up for them since they won’t. He cares about this house deeply, even more than the rest of the neighborhood seems to care for it. So when he gets word that the couple has been forced out of their house while it’s trying to be sold, Jimmie takes this time to do the one thing he thought he could never do; live inside the house his grandfather built.

For a few days, Jimmie feels at home, at peace. He throws in some of the old furniture of his father and he and Mont enjoy living in a spacious house. They enjoy the quiet, the room, and the warmth. One of the first things Jimmie does is run excitedly through all the floors and then out onto the balcony, where he proceeds to tell a tour group the truth about his home he feels has been covered up. Jimmie wants to keep this place. It feels like a part of himself that always belongs to him and is special to his history. Part of him knows it won’t last either.

Director Joe Talbot always keeps the picture feeling grand and moving, favoring an operatic score from Emile Mosseri that always heightens the somberness and sublime sensation of losing a part of yourself. Issues on the street are treated with both fear and grief, where shootings turn cocky gangsters into weeping messes, bitter towards a system they hardly understand or can do anything about. Mont tries to talk some sense into Jimmie as the anger boils much faster within himself. The two feel they were bound for more, writing and performing plays. Much like living in the house, this will not come to be. It’s the unfairness of life that their family seems doomed to acts most illegal and poor, as with one of their gigs being selling bootleg DVDs.

There’s an uneasy quiet to such a picture that is rather hard to explain at times but it mostly stems from one feeling as though life has left them behind. Jimmie at one point rides the bus and overhears too hipster young girls talking about how much they hate San Fransisco. Jimmie says they have no right to hate the city. They argue they do. He then asks if they love the city. “Yeah, I guess.” They’ll never know the love Jimmie once had and how heartbreaking it is to watch that love crumble when he seems less of a person within the world. This is exceptionally strong filmmaking delivered in a touching and meaningful manner, easily one of the best pictures of 2019.