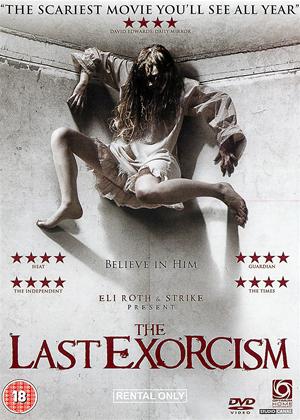 Synopsis:
Reverend Cotton Marcus is a well-known practitioner of exorcism, with many faithful believers in his work. He, however, is not one of them. In the twilight of his career he decides it's time to reveal the truth by allowing a film crew to capture the secrets of his final exorcism. Cotton's last case takes him into rural Louisiana, to the home of Louis Swcetzer, a simple farmer and a devout Christian. Strange things have been happening on the Sweetzer farm. His livestock butchered during the night, their bloody carcasses left to rot. By morning, Louis's apparently sweet and innocent daughter, Ashley, provides the only clue to the killings: she wakes up covered in blood.
And so Reverend Marcus prepares for his final performance, the exorcism of Ashley Sweetzer. But to his horror, he soon discovers that he will need to conjure much more than a charade to put this last demon to rest...
Actors:
Patrick Fabian, Ashley Bell, Iris Bahr, Louis Herthum, Caleb Landry Jones, Tony Bentley, John Wright Jr., Shanna Forrestall, Justin Shafer, Carol Sutton, Victoria Patenaude, John Wilmot, Becky Fly, Denise Lee, Logan Craig Reid, Sofia Hujabre, Adam Grimes, Cy Fahrenholtz, Geraldine Glenn, Cynthia LeBlanc
Directors:
Daniel Stamm
Writers:
Huck Botko, Andrew Gurland
Studio:
Optimum
Genres:
Horror

Reviews (3) of The Last Exorcism

Filmed in a documentary style the 'The Last Exorcism' follows Cotton Marcus, a Louisiana preacher who treats his sermons as almost a kind of entertainment and openly admits to performing phoney exorcisms, claiming most seeking exorcisms are just troubled families blaming problems on evil forces and seeking emotional help. Troubled by reports of children dying in botched exorcisms, Cotton allows a film crew to follow him perform an exorcism for a small town farmer whose livestock are being butchered, hoping the film will debunk the myth.

I was expecting a mediocre low budget horror but 'The Last Exorcism' was surprisingly good. The film starts quite light hearted and steadily becomes darker and more horrific in tone. The storyline is cleverly paced with some nice twists, and for a movie of this type the acting was well above average. If you're a horror fan then this should be on your rental list.

Evangelical reverend and showman Cotton Marcus has a plan to expose the concept of ‘exorcism’ as the farce he believes it to be. This, as you might imagine, is asking for trouble. He reveals to camera his ‘box of tricks’ (steaming crucifixes, sound effects etc) that will prove how gullible people are. Patrick Fabian is excellent as the fast-talking Cotton. The reverend is initially arrogant, cocooned in the high-energy joy he brings to his congregation despite not entirely believing his own words, but gradually becomes aware that events are bigger than he can possibly handle.

In ‘Blair Witch’ fashion, we are treated to interviews from the locals conducted by Cotton as he makes his way to where the exorcism is due to take place. Not all of them are friendly. One of the least amenable happens to be the son of the family for whom the exorcism is to be carried out. Indeed, one local’s proclamation that the house in question contains ‘the gates of hell’ is alarmingly prosaic.

When we meet the victim, Nell, allegedly under a demon’s possession, she is virginal and shy. Actress Ashley Bell overplays Nell’s wide-eyed innocence and wholesome smile … but then, we are meant to find her unnaturally good, in comparison to what comes later.

I enjoy horror films, but I only find a handful of them truly frightening. One is ‘The Exorcist’ which, as you may imagine, this shares similarities with – and this is another. Familiarity does not make the images of a young girl getting progressively more violent, unearthly and demonic any easier to watch. The look of horror on the face of her father, her (also very unnerving) brother (a brilliant performance from Caleb Landry-Jones) and Cotton himself is communicated very well to the audience.

Rather desperately, Cotton clings to the notion that – even despite bone crunching distortions (all performed without a stunt double) – the girl is not possessed by a demon but by shame. She is pregnant, and is terrified to reveal this to her God-fearing father.

It is ultimately revealed (and this is a SPOILER) that not only is Nell actually possessed (by a demon called Abalam), but (in true Wicker Man style) the entire neighbourhood is in on it also. When her new-born baby is thrown upon an open fire which apparently gives true life to Abalam, as a viewer, I am actually relieved – because up until that point, ‘The Last Exorcism’ had me just where it wanted me, figuratively watching behind my fingers, such was the power of performance and production. But the ending entered into a world of the fantastic, a revelation too far, that ripped the carefully built-up realism from the piece. Not that the climax isn’t effective – it’s just unnecessary when it serves to break the spell of what we had seen up till that point. The glimpse of an entity in the burgeoning flames is the only example of CGI in the film.

That bastion of decency, the UK Censor – who even since the 1930’s, has been a thorn in the side of horror pictures – banned the promotional poster because of its ‘offensive’ imagery. As is often the case, such reassuring suppression only helped fuel its success enough for a sequel, also starring Ashley Bell, in 2013.