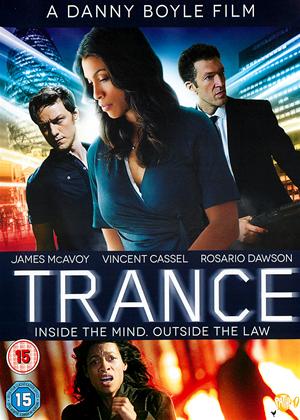 this had me lost after 30 mins, I didn't know what was reality and what was hypnotic.. Danny Boyle has made did films but this isn't one of them

I WOULD PREFER TO WATCH PAINT DRYING - Trance review by BR

The forst 2 minutes are great , Turn off after those minutes and find some paint to watch drying. complete tosh

Are you smart enough? - Trance review by BH

This is a gripping, whirlwind of a movie. You have to pay attention, but the way it plays with your mind as much as the characters is clever. You have to be able to go with it, but this is cool, stylish film, with arresting visuals and hypnotic music. Good performances too from McAvoy and Dawson. It twists and turns througout and Danny Boyle does just enough to get you to the end. Worth watching if you have the intelligence to stay with it.

With a premise that centres on multi-million dollar art, amnesia and hypnotherapy Trance could have been an over dramatic and pretentious thriller; in the hands of acclaimed Slumdog Millionaire director Danny Boyle however it is a tense and captivating mystery drama.

With such heightened sexual tensions the film practically reverberates with the tangible thrum of Rosario Dawson’s physique, coupled with her provocative therapy techniques and the dark but undeniably sexual character played by Vincent Cassel, James McAvoy’s art auctioneer Simon doesn’t have a chance.

Interestingly mirroring the still unsolved theft of Rembrandt's The Storm on the Sea of Galilee which went missing from the Massachusetts museum in 1990 Trance sees the very same painting stolen from an auction house shortly after the hammer falls down at $27 million. Simon, whose involvement in the theft is dubious at best, takes a nasty knock on the head that sends him to hospital and leaves him with significant memory loss. Under the duress of the implicitly dangerous Franck (Cassel) Simon begins hypnotherapy in an attempt to regain his memories of that fabled night.

As with any thriller with a really gripping story the allegiances of various characters and the audience’s suspicions are constantly in flux, weaving this way and that like an entranced Cobra who, the moment you stop to take a breath, will strike with deadly accuracy. Once again Boyle has created a strong and intense piece from the palest of skeletal structures; making Trance a very good, albeit far from Boyle at his best, film.