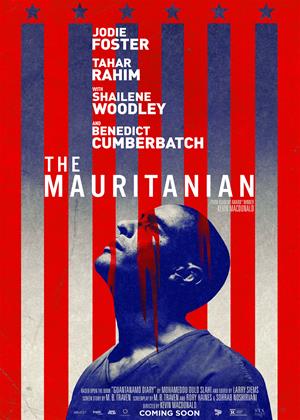 Reviews of The Mauritanian

Jodie Foster is the feisty lawyer committed to making sure the prisoners of Guantanamo Bay are not unfairly pressured and tortured into false testimonies and inhumane psychological pain. Benedict Cumberbatch is the military man trying to prove her wrong but conflicted in his American views the further he probes. The problem, however, is that they really shouldn’t be the stars for this adaptation of the Guantanamo Diaries, the biography of one prisoner who spent over a decade in that prison for a crime he did not commit.

The man in question is Mohamedou Ould Salahi. Suspected of being involved with the September 11th attacks, he’s captured by US forces and detained at Guantanamo Bay without charge or trial. He found himself going from enjoying the company of family to being detained at the military prison where he was shaved, beaten, and tortured in all sorts of inhuman ways. He’s reluctant to accept the help of defense attorney Nancy Hollander (Foster), especially since Nancy seems to treat this as just another case. It’s not. As she soon finds out, the government is hiding far more than she initially realized.

In a similar setting is Lt. Colonel Stuart Couch, played by Cumberbatch trying way too hard to make that southern accent stick. He’s on the opposite end of such a trial but soon comes to realize the evidence for the case not only seems lacking but fabricated. The further both Hollander and Couch probe, the more horrifying truths they uncover, shaking their worldview of the corrupt American military complex.

But this is a film called The Mauritanian, referring to the origins of Salahi. Shouldn’t we get more of him being the crown jewel of this dramatic biography with Tahar Rahim delivering a strong performance? Why do we get so little of him? His scenes are by far the most relatable and enraging elements that serve as the most important parts of the picture. The third act is particularly potent the way all the documents Hollander and Couch uncover are portrayed through Salahi’s eyes. There’s an aggressive pain, anger, and deep despair in all these scenes. And yet it doesn’t feel as strong.

I think the problem is that so little time is devoted to the central character and his plight. Consider how his additional eight years in prison after being found not guilty are reduced to a mere epilogue. Why not make that the entire focus of the third act rather than reserving it for the anticlimactic courtroom case which is kept far too brief.

The idea that this film must have some big-name stars playing the legal roles and that they must take up so much screen time is a bit of a problem. It’s not that Foster doesn’t put everything she has into this role because of course she does. But considering that Tahar Rahim starved himself to get into the right mindset of an abused inmate and he only feels like a secondary character is incredibly frustrating. Films such as Rosewater have proved you can have a compelling story about incarceration without such A-list backup to be an effective film.

The Mauritanian is an intriguing and important story to tell, even though this film is literally giving us half the story.