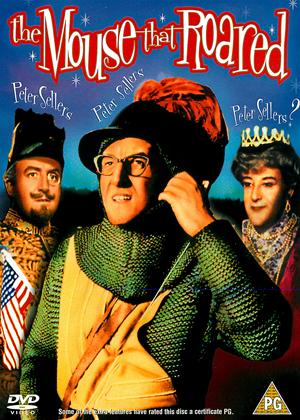 Reviews (1) of The Mouse That Roared

This is a very dated and silly satire, based on a post war novel. However, it is a neat conceit, however absurd, and the plot (which seems to get thinner as the film progresses to a rizla thickness) allows for some wonderful hammy acting from always-watchable Peter Sellers.

The multi-character playing is not up there with Alec Guinness standards (in Kind Hearts and Coronets). But really, Peter Sellers in an average and dated movie is 10 times more watchable than most actors in most movies!

It's a short film and funny - if one allows oneself to enter the absurd world of the story.

It's also a period piece and now looks quaint - people rehearsing going to shelters in preparation for a nuclear war etc. The post-war jokes are there - about how the USA showers the losing side in wars with cash (i.e. Germany and Japan) whereas the victors have to be poor and pay for themselves (the UK didn't pay its final payment to the US for money we borrowed to save the world until 2006. Yep, 2006!)

Oddly, it brought to mind 28 Days Later when the Fenwick 'army' land in New York to find it deserted. That movie beats this on the special effects but not the humour!