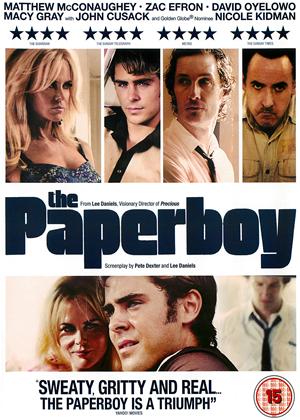 Reviews of The Paperboy

I get that racism in films has a purpose, it has a meaning to it. This is especially true of period pieces such as this one. However I have to believe that the depiction of a story is more important than the point you are trying to make, including a political one. That’s why I couldn’t abide The Paperboy, a mystery thriller with so many politically charged side stories it loses sight of what's really important, the plot.

Telling the story of the Jansen Brothers, Jack (Zac Efron) and Ward (Matthew Mcconaughey) and their investigation into the murder of a small town sheriff by alleged psychopath Hillary (John Cusack). They find themselves joined by Hillary’s new penpal, sexpot blonde Charlotte (Nicole Kidman) who is desperate to prove his innocence.

The film, based on Pete Dexter’s novel of the same name, fails to understand the point of the original book turning a tense, water cooler piece of fiction into needlessly salacious rubbish with a love story buried deep inside the layers of insulting politicization to be expected from a Lee Daniels movie. The novel used politics but it had the decency to tread carefully and use it sparingly.

That being said, the film evokes the same tone as its source material, a slow methodical march to a shocking conclusion with Efron and McConaughey leading a dead in the water picture like champions with Efron surprising as he miraculously comes out of The Paperboy on top, not as a character but as a serious actor. The highlight however is Macy Gray as Ward and Jack’s maid, a black woman treated horribly by their new stepmother despite her position as de facto mother to the two. She’s the most compelling character in the film and her scenes provide the only meaningful piece of social commentary in the whole picture giving you what amounts to 15 minutes of genuine drama to mix in with 90 minutes of dross.