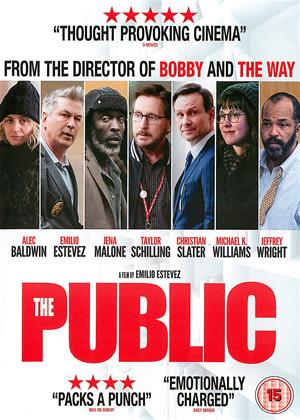 Reviews (4) of The Public

A great watch - The Public review by IE

Absolutely loved this film. Easily one of the best films I’ve watched in a while. I know homeless guys and girls have a really hard time in real life, but loved the way the film brought forward the qualities of the characters they were playing. You could easily relate them to people you know in real life.

Okay film, with some decent performances but weak script.

The film had its heart in the right place, an clearly a passion project for Emilo but it wasn't brilliantly written/directed by him. A lot of broad strokes were given to the 'good' and 'bad' characters. The film presents lots of easy answers to a complicated situation (there was a passing reference to the mental health and drug addiction of the homeless characters, but outside of a seizure one older man has, which may or may not have been drug related, no one inside the library seemed too affected by addiction or mental health issues)

Emilio being a former rough sleeper/recovered drug addict turned book lover seemed all a bit too pat. I wish there'd been more complexity. Also throwing in comments about fake news and the environment, and so many of the homeless being noble ex-veterans with no former criminal past seemed a bit of a cop out. Decent film, but compared to Dog Day Afternoon or the excellent documentary Dark Days, sadly lacking in research and creditility.

Too long too boring - The Public review by cr

This film is long and mainly consists of emilio wondering around and.filming people. Silly ending. This film is overdue!

Interesting and Solid American Drama - The Public review by GI

The perfect Trump era social drama with a nice dose of good humour thrown in which makes this very watchable and quite heart warming even if occasionally its a little underwhelming. Written and directed by Emilio Estevez he also stars as Stuart, a librarian at Cincinnati's large central public library. During a particularly cold winter the library is daily inhabited by the city's homeless trying to stay warm. They're generally an affable lot and Stuart treats them with respect although they cause wannabe Mayor, Josh Davis (Chritian Slater), a lot of angst. One evening a large group of the homeless decide to stay in the library as there are insufficient shelters in the city. Stuart supports them but soon the forces of law and order led by Davis and cop, Bill (Alec Baldwin) treat it as a siege and a stand off begins. There's no doubt the film is a direct attack on the right wing media and far right politics of contemporary USA and occasionally it's very blunt in its messaging. But it's overall a rather pleasant film with it's heart firmly in the right place and for that its well worth a watch. Good support cast also includes Taylor Schilling, Jena Malone, Jeffrey Wright and Michael K. Williams.

There’s a sense of parody with something like The Public, as though it were a satire of a public domain television movie built on a budget around the public library. It has a lot of the hallmarks of staging a librarian to be the hero of a stand-off situation and try to communicate in quotations of his favorite novels. There’s a negotiation situation where intellectuals square off over the phone and hobos become the tricksters in this tale. But when the films come armed with a talented cast, I couldn’t help but feel the film could take better advantage of its scenario beyond that of a melodramatic tale where the underdogs don’t so much win as get a few moments in the sun.

The Cincinnati public library has become a hub during the winter months as a sanctuary from the cold for the homeless. Trying to keep this tension calm is the stoic and committed to maintaining peace is librarian Stuart Goodson (Emilio Estevez). He has a history of problems but has turned himself around with books and his work in the library. Perhaps, he hopes, some of his life-changing can rub on the unfortunate few that reside during open hours. He’s a good man in the sense that he never becomes too chummy with the hobos but still won’t hesistate to correct them on a subject or offer them up some cash if they need it.

But the problems are mounting for the library. Not only is the building being sued for by the rude district attorney (Christian Slater) for not allowing in a foul-smelling patron but a wicked cold snap has led many of the homeless to believe they’ll freeze to death in the streets as the shelters are full. Fed up, both Stuart and the homeless stage a protest of locking themselves in the building until their demands are met. A crisis negotiator (Alec Baldwin) will be called in with some personal gain in this development and Slater will continue to hang around the building as its election season and he’s hoping for some good press.

The Public is such a frustrating picture because it touches on so many issues and never goes much of anywhere with them. The homeless situation is a real problem but most of the homeless within the library are quirky and fun, rarely showing a sensation of emptiness. The issue of a corrupted official in Slater’s character is treated more like a cartoonish villain than a real threat to the city for not taking the less fortunate to heart. Even the media, another avenue of distortion and demonizing the less fortunate is also treated like a lunatic villain, though much easier destroy in this story.

This movie chooses so many targets and than only gives them easy hits and goofy constructions. We see Slater portrayed as someone in need of a good public lashing but he is only given the mild punishment of dirty looks and scorn by voters. The media is given a lashing but only enough where Stuart’s love interest can declare that a lying reporter unsophisticated in literary quoation shouldn’t have a job, as though it were a kid calling someone mean for not getting their lingo. As prove of how disinterested the film is in finding anything more within its story, the climax involves everyone in the library getting naked and singing loudly. While it does gain attention and send a message, it’s presented as comedy which brings with it an unease to commit.

Maybe I’m searching for too much out of this movie that seems to only be aiming for melodrama and soft laughs. But when a comedy takes aim at high targets and never really punches that high, there’s a bitterness to never saying something about real American problems. The ultimate message of the film seems to not be about the homeless crisis, corrupted officials, lying media or even climate issues. All that is present but the last word seems to be that libraries are important avenues of knowledge. And I agree; libraries should be used for far more than timid negotiation dramas.