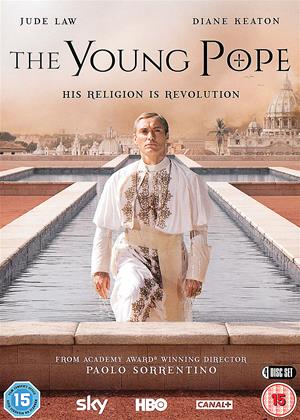 Synopsis:
Created and directed by Paolo Sorrentino, 'The Young Pope' tells the story of Lenny Belardo, aka Pius XIII (Jude Law), the first American Pope in history. Young and charming, his election seems to be the result of a simple yet effective media strategy on the part of the College of Cardinals. But appearances can be deceptive. Above all, in the place and among the people who have chosen the great mystery of God as the compass guiding their existence. That place is the Vatican and those people are the leaders of the Church. And Pius XIII proves to be the most mysterious and contradictory of them all.
Shrewd and naive, ironical and pedantic, primeval and cutting-edge, doubting and resolute, melancholy and ruthless, Pius XIII tries to cross the endless river of human solitude to find a God he can give to mankind. And to himself.
Actors:
Jude Law, Diane Keaton, Silvio Orlando, Scott Shepherd, Cécile De France, Javier Cámara, Ludivine Sagnier, Toni Bertorelli, James Cromwell, Ignazio Oliva, Sebastian Roché, Marcello Romolo, Vladimir Bibic, Nadee Kammellaweera, Guy Boyd, Andre Gregory, Daniel Vivian, Olivia Macklin, Armando Pizzuti, Collin Smith
Directors:
Paolo Sorrentino
Producers:
Jude Law
Creators:
Paolo Sorrentino
Writers:
Paolo Sorrentino, Umberto Contarello, Tony Grisoni, Stefano Rulli
Studio:
Dazzler
Genres:
Drama, TV Dramas

Reviews (5) of The Young Pope

So Disappointing - The Young Pope review by JB

I really wanted to like this series. I was hoping for an offbeat drama with sly humour, interesting characters and maybe even some insight into the conflict of the spiritual life struggling in a massive bureaucracy. Wrong on all counts. What little humour there was is puerile, the characters are all cardboard cutouts and, if there are any insights to be had, they somehow slipped by my awareness. How a young man who is a completely amoral narcissist came to be elected pope is never given any explanation, and the entire Vatican hierarchy is so hapless that one can not find any attempt at either a meaningful or genuinely satiric commentary. I hung on for the entire first episode hoping it would improve and start to develop into an engaging story. It didn't.

Everybody raves about TV shows and I hated all of them, including the supposedly the best like The Wire (which I forced my self to watch the full first season), Treme and numerous others which I never watched past one or two episodes. This is finally something I genuinely enjoy. It's beautiful and I find the story truly intriguing. So the moral might be that if you hate everything else you might like this.

The Young Pope is not thrilling or highly gripping; it is slow and rich and beautifully composed (including some typical eclectic music choices). Sorrentino is a very individual director with his own style. It's great to see someone like him getting creative control of a big budget series. It's not meant to be an insight into the reality of the Vatican but more an exploration of how a certain way of thinking might work within the idea of the vatican. Not everybody's cup of tea but if you like his films you'll enjoy this.

This is from the director of the awful yet inexplicably overpraised prize-winning film THE GREAT BEAUTY. It is equally bloated and pompous, overlong and often pointless. But then, it is Italians and they like it like that maybe (as do the French and Spanish), and also very VERY Catholic.

If you are not Catholic and do not believe in miracles and magic or that some old man - usually Italian - who gets made Pope every now and then is chosen by God to lead the church and humanity, you probably won't like this TV drama series much. Of course, we now have an Argentinian Pope and before that a German and before him a Pole, and one English pope Adrian IV for 5 years in the middle of the 12th century. Apart from that, all Italians and often very abusive, brutal and corrupt - often had kids too who they called nephews (where our word nepotism comes from).

It is pleasant enough BUT oh SO unbelievable that I could not really suspend my disbelief. I just do not believe a word of it, or the miracles, or the magic etc though Vatican intrigue is well known - that place is stashed with treasures stolen over centuries (incl the solid gold menorah nicked from the main synagogue in the siege of Jerusalem over a millennium. The Catholic church is ALL about wealth and power, now an always.

I enjoyed some parts and characters. The nuns were funny; the references to gay priests too. But cynical sceptical non-believers like me not the target audience maybe.

I just cannot believe the story esp the 3rd act. It's really an attempted fairytale. I enjoyed seeing Rome as I have been there twice - CGI in many places though. Try watching THE TUDORS for more Papal intrigue.

Jude Law was good in the role as were other actors.

2 stars. Thankfully there is no series 2.

Lots of nice imagery, but I found it extremely lacking on the plot front, and my interest waned by the mid-point.