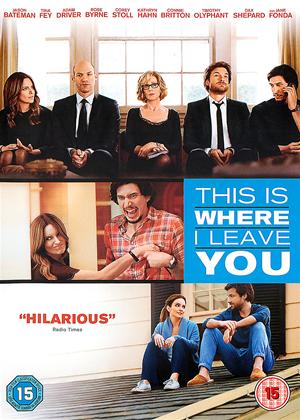 Rent other films like This Is Where I Leave You

Reviews (3) of This Is Where I Leave You

Ridiculas - This Is Where I Leave You review by JR

Quick review coming up. Not as funny as it looks on the advert, in fact not that funny full stop!

I didn't make it to the end of this movie. Not because it's truely terrible in general, but as soon it becomes obvious the main character is going to forgive his wife for cheating on him for a year because she is going to have his baby I turned off in disgust! What a load of Hollywood BS!

I should have left this film in the rubbish bin. Revolting altogether. Stupid plot, waste of some of the actor's , who are usually in creditable films. Total waste of my time and I only watched 30 mins.

American actors just are themselves? Jason identical in all roles, and all roles are similar. Having said that he fills the gap as the nice guy etc.

Jane Fonda is 77 in this film, which is in itself worth a watch. Golden Pond was a few years back now!

Could have been a bit more biting in the end. A bit pathetic him going back to major cheating wife. There was an optional open clause that he may sort his brain out in 6 months..........by then we hope his old flame has found someone else!

In the sense that too many cooks can spoil a broth, This is Where I Leave You is a sour mess of overstuffed potential. It has a powerful cast of powerhouses that include Jason Bateman, Tina Fey, Jane Fonda, Adam Driver, Timothy Olyphant, Dax Shepard and so on. All of them are fantastic actors and they do their best with the material in the screenplay. The unfortunate news is that they’re all trapped in a cliche dramedy with far too many intricate plot lines to juggle and humor that all falls flat. When one of the running gags involves a four-year-old going to the bathroom outside, you know this movie is trying too hard.

The dysfunctional Altman family is brought to together after the death of their father for the Jewish act of shiva, in which the family must remain together under the same roof for seven days. And it just so happens that every single one of them has complicated issues, toppled further by an extremely sexually open mother (Jane Fonda). All of them bring plenty of baggage. Judd (Jason Bateman) has divorced his wife for sleeping with his radio shock jock client, but she soon discovers that she is pregnant with Judd’s child. It’s made all the more frightening by the fact that they’ve had a miscarriage previously. At the same time, Judd also runs into his high school sweetheart that he may have a shot with and is nearly raped by one of his sister-in-laws because she desperately wants a baby. And that is just one storyline of the five others baked into this incredibly dense plot.

Just about every scene feels like a big missed opportunity. We get to a moment to where we may see some real emotion between Tina Fey as the wife who left Timothy Olyphant at a young age when he had brain damage, but it peters out after a few minutes and whips away to another scene. There’s are some decent setups for gags as when Jane Fonda’s character talks about sex openly around her children like a vulgar nymphomaniac veteran. But, once again, we merely linger for what seems like light improv until the gears switch to more soapy drama. Then it’s another gag involving either adult language, slapstick or the old chestnut of bodily functions. And then we turn to something far more awkward and intentionally emotional as the worries of losing a child before birth. This is a film that wants to take us for a ride, but doesn’t let us enjoy the journey as it yo-yos our emotions up and down too artificially.

All throughout watching this film I couldn’t help but think of the TV series Arrested Development for its similar character structure and the obvious straight-man inclusion of Jason Bateman. It made me pine for a comedy that was more clever and madcap than a baffling mixture of the scatalogical and the juvenile verbage. To put things in perspective, the longest running joke throughout is that the rabbi coordinating the shiva is an old high school friend of the children that they used to call Boner. And if you think they’re going to make any other jokes out of that nickname besides the obviously sexual, you’re wrong.

The movie was directed by Shawn Levy best known for his directorial efforts of the Night at the Museum trilogy. That should tell you everything you need to need to know about his sense of directing comedy and drama which he fuses together with all the subtlety of a wrecking ball. Even when given an adaptation of a best-selling novel with a screenplay by the original author Jonathan Tropper, he still fails to deliver on anything except a series of bitter arguments, hokey emotional pleas for tears and humor that feels entirely out of place. If only he had the cuts to trim some of the fat with character arcs that never go anywhere, there might have been a capable story here for these actors to strut their stuff. All they can do is put their best foot forward as they fight for screen time and do their best with what little comedy or drama fuel available. This is Where I Leave You is less of a movie and more a compilation from a TV show that edits out the punchline of every episode.