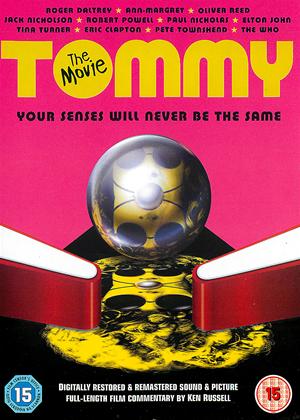 This movie is quite possibly the most seventies thing ever. You can see exactly why punk had to be invented the following year; they just couldn't take a chance on anything more excessive than this happening! You can also see how a man once hailed as a towering colossus of British cinema would eventually end up making movies on video in his back garden.

This utterly bonkers tale, in which we simply have to take it on trust that competitive pinball is the ultimate spectator sport, is stuffed from beginning to end with imagery so bizarre that it frequently resembles "2001 - A Space Odyssey" directed by Terry Gilliam and starring the Monkees. The music, which since this is a rock opera is non-stop, ranges from excellent in a seventies kind of way to dreadful in an even more seventies kind of way, but although the one song people still remember is usually Elton John's "Pinball Wizard", even though if you haven't seen the film it makes no sense whatsoever, Tina Turner definitely steals the show as the feral Acid Queen who gives Tommy the least appropriate amateur psychotherapy imaginable!

The acting is equally variable. As the catatonic Tommy, Roger Daltrey, who would only win an Oscar if there was one for Least Worst Actor In The Who, is better cast than he was as Franz Liszt, and Oliver Reed, just beginning to show the first signs of his slide from handsome brute to bloated wreck, is memorably vile as Tommy's hedonistic monster of a stepfather, though I could have done with a bit less of his singing voice (and rather more of Jack Nicholoson's, which is surprisingly good). Still, with a plot and scenery like this, you can't blame most of the cast for overacting.

Unfortunately, although the parts of the movie where Tommy is still locked up in his own head are an astonishing visual and conceptual assault on your eyes and brain, the overly blunt satire of fake religions in the last half hour drags a bit, and rather too much of it consists of a very smug Roger Daltrey singing hymns in praise of himself. The barking mad Church of Marilyn Monroe we encounter earlier on makes the same point just as well, and is far funnier. But the bits that really work aren't quite like anything else you'll ever see, except perhaps in other films from Ken Russell's "starting to go nuts but still getting decent budgets" period. If you're in the right mood, it's a hoot! I mean, what's not to like about a movie in which Tina Turner morphs into a psychedelic torture robot?

Most rock/pop movies have lame scripts and drop the band into a commercial vehicle to let us gawp at the good looking twerps therein. This however is a creative masterpiece that is ground breaking in itself and if anything, enhances the ground breaking rock opera Tommy. Ken Russell was born to team up with a rock band.

The songs are a tower block above the weak La La Land and other unmemorable musicals of late, let alone their delivery (Let Cats be a lesson to you!). Each segment of the movie is a foretaste of music videos to come. Tommy is the first complete 'concept album' as Sgt Pepper was a couple of tracks that alluded to that 'concept' then was a collection of great songs.

The sound quality is worthy of a home cinema 5.1 outing so go for it. A unique slice of rock movie brilliance.