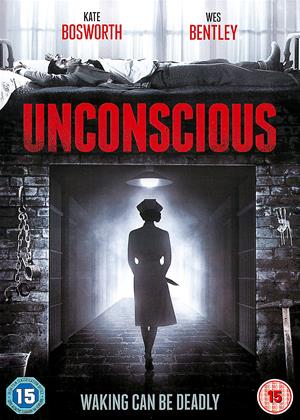 Synopsis:
When a man (Wes Bentley) wakes up strapped to a bed, confused and with no memory he is greeted by a mysterious and sinister woman (Kate Bosworth) claiming to be his wife. Venturing around the derelict household, he finds traces of blood, unexplained, unusual objects and grows increasingly suspicious and afraid of the enigmatic woman. Stumbling across the cold corpse of another man, bound and locked in the basement, he realises how deep and dangerous the web of lies and deceit go, but suddenly, all is black, and when he awakes again he is a prisoner, trapped and unable to move. It is only then that the electric shocks begin and the true nature of his wife is revealed...
Actors:
Kate Bosworth, Wes Bentley, Olivia Rose Keegan, Shashawnee Hall, Richard Riehle, Patrick Bauchau, Mia Barron, Adam Moryto
Directors:
Michael Polish
Producers:
Richard Halpern, Lucas Jarach, Jason Price
Writers:
Amy Kolquist, Mike Le
Studio:
Kaleidoscope Home Ent.
Genres:
Thrillers

Wes Bentley plays an unnamed man who regains consciousness behind the steering wheel of a car after a crash. He has no memory of what has happened except for a few sporadic flashbacks of a teenage girl in the back seat, and the blurred figure of a woman – presumably his wife – approaching him through the haze.

Kate Bosworth plays the finely chiselled, perfectly poised wife (also unnamed). Her emotions are in constant check and she barely speaks above an unobtrusive whisper, which is somehow suggestive of both kindness and hidden mystery – she is surely too good to be true? And what of the girl in the back seat? When the man reawakens some time later, bathed in cool sunshine, recovering from his ordeal, the girl is suspiciously absent from the spacious family home?

There is a certain intrigue here, and it is thinly spread. The wife’s obsession with cats, and her habit of littering conversations with random facts to keep her husband’s brain alert, his realisation that there is nothing wrong with his ‘broken’ ankle … all these things pepper the story with an increasing strangeness.

As if the husband’s suffering is not enough, nice Dave the postman is soon dispatched, a sudden unveiling of the woman’s insanity. Shashawnee Hall as the detective only appears to take an interest once things have reached a critical stage. ‘The daughter’ AudreyOlivia Rose Keegan, has been a ‘bad girl’, and is revealed to be kept in a cage. She will be released when the woman is made pregnant, as is the wife’s insistent wish.

In a satisfying twist, both the man and the woman are guilty of kidnapping young Audrey in order to raise money to pay for the wife’s ‘treatment’ – she might even have caused the crash that caused her husband to lose his memory. As he escapes her clutches and ends up in the unsympathetic care of the hospital, a nurse walks in following this revelation, and switches off the life support system, ending his life. It is the wife, and last thing he hears are her words, ‘I put things to sleep for a living, and they don’t wake up.’

This is an enjoyable mystery/lightweight horror with the final twist handled skilfully enough to make sense. The story isn’t quite as gripping as it would like to be. The performances are uniformly good, especially from Hall – the characters remaining icy and detached throughout.