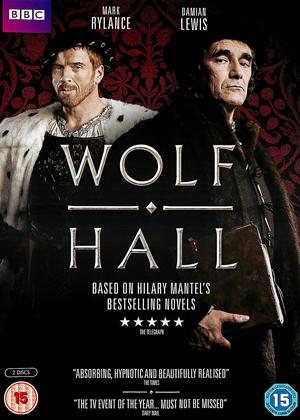 Based on the historical novels 'Wolf Hall' and 'Bring Up the Bodies' by Hilary Mantel, this is a 6-part BBC costume drama centred on Thomas Cromwell and his rise to power in the time of Henry VIII.

The central figure of Cromwell is superbly well played by Mark Rylance who, together with a terrific script, manages to portray a combination of resilience, determination, humanity and political astuteness. Very cleverly done.

The script is excellent (although the novels inevitably have more detail than the TV adaptation), the acting is excellent, the costumes are excellent and the locations well chosen. Natural light and candlelight have been used - so much so that some have complained that the image is too dark. I didn't find it so - but the lighting is much lower than in most films.

It is of course a drama rather a history, so whether this is a realistic portrayal is in some doubt - but it is startlingly well done.

Hilary Mantel is writing a further novel covering the period to Cromwell's downfall and it is expected that this will be the basis for a second TV series. I'm looking forward to it.

This really is historical costume drama at its very best. 5/5 stars. Highly recommended.

Brilliant acting, as would expect. Could not read the books at all. Is a bit looooong and drawn out when seen in a block.............

Watched the first episode on TV and always wanted to find out what happend - Wolf Hall: Series review by DP

Not sure who was supposed to be the star, but for me Mark Rylance was easily the winner. Superb characterisation of the dangerous times and the menace of being in the court of Henry VIII. Great riches, but great danger. The series is a must see for anyone who enjoys the power struggles that have shaped British life from then on. Wonderful