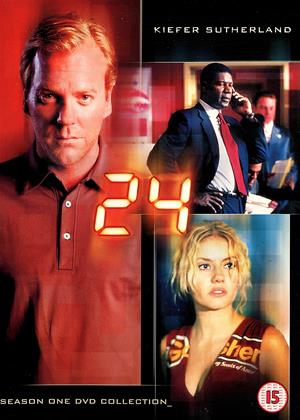 I have missed all of the "seasons" of this show as it has aired on TV but have heard many people raving about it. I can already see what the fuss is about. Superb acting (especially for a TV series), taunt plot and so atmospheric. I will be watching them all! Excellent!

I recently rented 'Live Another Day', perhaps best described as Season 9 of '24'. While I've missed a few, I remembered watching the first series way back in 2002 and thought I'd get it down from the shelf and watch it again.

In its day, '24' was innovative, following the action in 24 x 1 hour episodes, each covering a single hour of real time (well, approximately - we still need to allow for the inevitable commercial breaks) as the central character, counter-terrorist agent Jack Bauer (Kiefer Sutherland) bends and breaks all the rules to get the bad guys. It was tough, it featured leading edge technology (that might almost have been true) and used a split-screen technique to show different concurrent events with a shaky hand-held camera technique to give a pseudo-documentary feel

Viewed again some 14 years later (it was made in 2001) it's a bit dated - things have moved on, politically, technically and in film technique. It's now no longer a novelty to have a black US President, the mobile phones now look ancient and the 'shaky cam' technique has been done to death. I was however mildy impressed by the use of a PalmPilot PDA, much as we might use a phablet in 2015. And one major thing about the politics - this was made before the events of 9/11, so the baddies turn out to be Bosnian Serbs and not Muslims...

As far as the story is concerned it's yet another assassinate-the-president tale, mingled with the kidnap of Jack Bauer's wife and daughter, and the search for a mole in the department. It's actually quite good, and although it's pretty long (I calculate about 17½ hours of viewing) there are enough plot twists and red herrings to keep up the interest. But frankly there was too much teenage squealing from the girl, and building a story around daughter problems has also been done to death, for example in 'Taken' and more recently in '3 Days to Kill'.

Having said that, I enjoyed it - even the second time around. 4/5 stars.