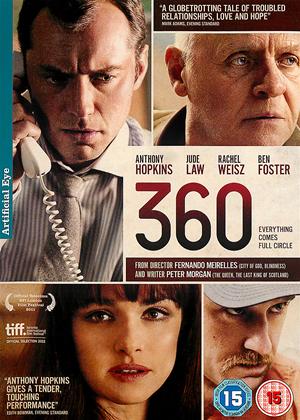 With stars such as Anthony Hopkins, Jude Law and Rachel Weisz in front of the camera and artists such as Fernando Meirelles, City of God & The Constant Gardener and Peter Morgan, Frost/Nixon behind 360 had all the cards stacked in its favour. Unfortunately this circular story of fidelity and coincidence breaks and wavers leaving us with a beautiful but indistinguishable spider’s web.

Loosely based on Arthur Schnitzler's “La Ronde” the film follows a multitude of characters as they lead their seemingly separate lives in various countries across the globe, only to tie all their stories together in the final moments. The production company proclaimed 360 a suspenseful thriller, personally I found the “thriller” element a little hard to decipher in between all the bed and continent hopping.

In fact I think it would be more accurate to call this movie a romantic drama, of sorts, it lacks the clean lines and pure values of this traditional genre, yet their removal has not given 360 an updated sense of darkness and realism, instead it just leaves the film lacking any emotional depth.

Though it is always a pleasure to see talented actors such as Weisz and Hopkins work, neither of their characters hold any real gravitas or even have a particularly strong script to work with, rather their talents flash past in their brief vignettes, meaning that any dialogue they do have seems barely to have time to pass their lips. It doesn’t help that there isn’t much to the characters they have been given to portray. The most compelling characters and storyline are in fact that of Mirka (Lucia Siposova) a high class call girl and her much quieter sister, Anna (Gabriela Marcinkova) who travel together across Europe for Mirka’s work. Though Anna does not take part in his sister’s endeavors, she accompanies her for moral support and finds herself making her own unexpected acquaintances along the way. I could not help but think that a film dedicated entirely to these two would have been far more entertaining than the finished article that 360 turned out to be.