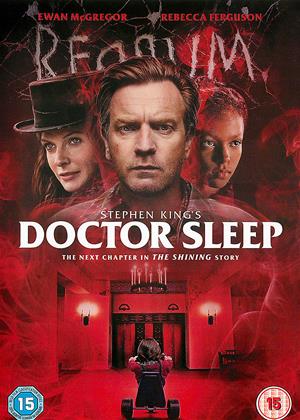 Just What The Doctor Ordered - Doctor Sleep review by Spoons

Doctor Sleep reminded me of my cinema going days thirty years ago when big films were called "Event Movies" and that's exactly the feeling I got watching this. It is a fantastic companion to the brilliant The Shining which was indeed an event movie all those years ago. Ewan McGregor shines(pun intended) as the now adult Danny Torrance and the supporting cast are excellent. The recreation of The Overlook Hotel in the last quarter of the film is absolutely stunning. The movie warrants the long running time of 2hrs 30 mins but please make sure you see The Shining before you see this if you haven't already because otherwise Doctor Sleep won't really make any sense. Fantastic stuff.

... had to switch off halfway through because of a scene featuring the torture of a young boy.

7 out of 16 members found this review helpful.

The shining is a classic so this film had a lot to live up to. I like that it was a new take with only the last hour showing any close relation to the original. Ewan does a good job but of course no one will come close to Jack Nicholson. I was entertained although it could of been shortened a bit as did lapse a bit in the middle. Still watch it again.

Stephen King is a masterful writer. Some of his books transfer well to the cinema and some less successfully. This book was crying out to be made a film. Ewan McGregor did a good job but for me the star was Rebecca Ferguson. She oozed menace. Great entertainment and compares well with The Shining. Thoroughly enjoyed it.

My wife gave up half way through and I fell asleep before the end, as just couldn't make sense of it. Probably better as a book. Must be getting too old for this sort of thing.

Absolutely wouldn’t at all recommend this film, which is an embarrassingly awful supposed sequel to The Shining, which is an all time classic.

This was like a teen film tv ‘horror’, with no character development, and a contrived attempt to link it to The Shining. Euan McGregor obviously needed the cash for a new infinity pool.

Worest film I’ve watched for a very long time.....AVOID at all costs, and go for a sleep instead!

A belated sequel to The Shining, an over-rated and tedious film that was most notable for Kubrick making his lead actor overact and giving his lead actress a nervous breakdown. Doctor Sleep is a similarly overlong film with an initially tedious scattergun plot that takes a whole hour to come together. Boy Danny from the original film has now grown up into Ewan McGregor (given little to do) and we’re introduced to a mystical group called the True Knot, who elongate their lives by inhaling ‘steam’ (the breath of murdered children). Presumably we’re not meant to laugh at child murder, but it’s difficult to take this nonsense seriously.

Things do pick up in the second hour when the cast divides into goodies and baddies and there are some watchable altercations, including even an old-fashioned gun battle, but it doesn’t last. The final tedious half-hour is more concerned with re-living scenes from The Shining that serving the plot, resulting in a groan-worthy damp squib of an ending.

Themes we have become accustomed to from this Steven King story; starts off with kids being taken (IT) then a bunch of vampire like creatures (Salem's lot) and then the tenuous link to the Shining. A long film with not much to say really. Never becomes clear what the shining is or its power source, but baddies eyes light up now and again.

The heroine is all powerful one minute then needs protecting the next from someone she beat up earlier. The final showdown is a let down as it explains nothing and introduces characters I don't recall from the Shining. Where were they when Jack Nicholson needed them?

Some shock moments and violence towards children which is a cheap horror shot. All in all a bit disappointing, although reasonably entertaining.

Really enjoyed the movie. Rebecca Ferguson is superb and the story isn't bogged down by it's relationship to The Shining. The special feature interviews are well worth watching as they feature Stephen King and give an insight on his and the director's views on creating closure for the characters. Be warned, there are a couple of particularly hard-to-watch scenes!

if you like the first film at all, do not  sully its memory by watching this tosh. Worst styling/costumes of all time,  Terrible acting, the whole thing  (Including the ‘effects’)?seems like it was made in the early 90’s.

I want expecting that much, but this was way worse than I could possibly have imagined!  includes some b list lookalike’s recast as  the original characters ????

In 2013, Stephen King returned to The Shining by writing Doctor Sleep. The story returned with more to delve into with the Shining powers, sure, but also brilliantly weaves in issues of addiction, fear of death, and fear of being reaped of value for your talent. Now, with a film adaptation by Mike Flanagan, we return to the movie version of Shining with all its familiar cues. Thankfully, this less of a reunion and more of a merging of Stephen King’s brilliance for fear and Kubrick’s stylish take albeit conflicting with King’s vision.

We catch up with Danny after the events of The Shining, now played by Ewan McGregor. Rather than hone his powers, he tries to not only conceal it but conceal the ghosts that haunt him. His drunk and violent lifestyle leads him to the tough choice of coming to a small town to reform himself. He has some help not merely from the kindly townsfolk, willing to give him a roof over his head and AA meetings to recover, but also from another person with strong Shining power. Miles away, the teen girl Abra (Kyliegh Curran) communicates with him telepathically as a sort of shining pen pal.

But the world contains a more real horror than the mere ghosts that once haunted Danny. Rose the Hate (Rebecca Ferguson) runs a traveling folk called True Knot, a collective that survives by feasting on the powers of the shining. They’ve somewhat found the answer to immortality, realizing that consuming the souls of the shining can make them live longer. They seek out others with the power and determine whether they take them into the fold or eat their soul. A homeless hustler girl with mind-control powers to make people sleep seems perfect for the group. A talented baseball-playing kid, however, serves more as a sacrifice. Naturally, it won’t be long before Rose and her group catches up with Abra and Danny, leading to a showdown.

While that description of the story may make it sound like some sort of AKIRA style battle of psychic powers, Doctor Sleep takes care never to let its new additions and theatrics overshadow the grander themes. There’s a number of real issues and allegories present. The most obvious is Danny’s addiction to alcohol that has tarnished his view of himself. The bigger picture of the story seems to take aim at the fear of both death and difference. It’s hard not to see the clear parallel to capitalism the way the True Knot both seek to corrupt power early and then feast off their own when their number is up. It’s for this reason why the villains are more terrified than our heroes in terms of who they are. True Knot fears death and is so desperate to find more power. Danny, however, works in a hospice and has come to terms with what it means to die, no longer fearing to face the ghosts of his past.

While the film does draw much from the previous film in terms of flashbacks and some visuals, as well as the somewhat expected return to the spooky mansion, Flanagan does a strong job trying to make his film distinct from Kubrick. It’s a tough act to follow but there’s a lot of brilliant visuals to expanding on the shining lore without falling back on the more familiar mysteries. I’ve also got to mention how refreshing it is to see a film with NEW actors playing familiar characters for flashback sequences rather than falling back on CGI. Major props to the casting of Carl Lumbly, Alex Essoe, and Henry Thomas doing an amazing job subtly replicating the likes of Scatman Crothers, Shelley Duvall, and Jack Nicholson respectively.

There are real moments of terror in this picture, from the eerie lingering of paranormal powers to the very gruesome torture scene of a boy. There are very intriguing character arcs the way Danny comes to terms with mortality and Abra comes to terms with not hiding her powers. All of this contributes to a film that serves less as Shining 2 and more as a sequel worth returning to after nearly forty years.