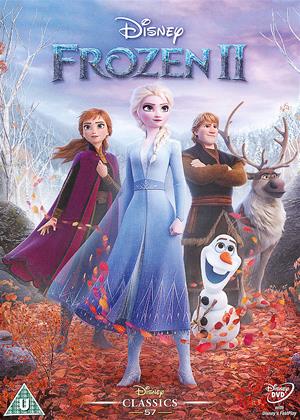 The animation is wonderful but the songs go on forever and are utterly forgettable.

Its just not much fun when compared to the first one.

Not quite 1 - Frozen II review by NC

Typical sequel one would expect. Songs not as memorable of course. Characters a bit faded, but kids will still love it.

Not the best sequel - Frozen II review by AL

Unfortunately as expected it wasn't as good as the first one. The songs weren't as good and the kids wondered what was going on at one point I thought it was becoming a Bruce Wills Syfy classic!

But animation was good, story soet of made sense and tied things up nicely.

So all and all, it was ok, but forgettable

Although olaf was good.

A sweet, colourful sequel that doesn't quite hit the same heights - Frozen II review by BG

Frozen 2 has many of the same ingredients as before, and manages to be consistently charming as it opens with the sisters looking after their kingdom. Kristoff is nervously trying to work out how to propose to Anna, and all seems to be going well...until strange events send the sisters on a quest to investigate the past, which might determine the future of their home.

Sven and Olaf are along for the ride (and just as much fun as ever), and the animation is great.

The songs are pretty good, and although a touch less instantly likeable than some of the originals, they still work very well within the film.

We also get a lot more about the history of the kingdom, and Elsa's path becomes more challenging than simply being pretty and trying to control her powers.

This is a film that wants to throw in some meaty material about how people treat each other. That works quite well, and the plot strives to keep viewers interested all of the way to its unusual conclusion. The relationship between Anna and Kristoff is handled less ably. In an attempt to ensure that the male role doesn't step on the toes of the two female leads (understandable, as this is a film where the real interest is centred on Elsa and Anna), Kristoff has been rather neutered. Apart from a funny proposal rehearsal, he's been written as utterly subservient. After repeatedly being the butt of dismissal, interruptions or insecure interrogations by Anna, in the climax, after being essentially left behind without explanation, his only meaningful contribution is to ask what another character needs, and provide it without question. While his supportive actions are very sweet, and it's nice to see the 'boyfriend' role take a back seat in such a male dominated industry, it's so extreme that is comes across as slightly patronising and condescending to the female characters. It's almost as unrealistic as the idealised super-rich, super-perfect princes of the past, and it's worth wondering whether robbing the character so completely of any right to challenge Anna's behaviour (which is often painted as paranoid or insecure for comic effect) is really the right message to be sending.

That aside, Frozen 2 remains a very enjoyable and worthwhile sequel, and fans of the original will be likely to thrill just as much to the continuing adventures of Elsa and Anna. Whether parents will be able to cope with listening to significantly lesser songs on endless repeat however, is a question only they can answer.

A sequel to Frozen cannot be easy to muster. The 2013 Disney animated hit saturated the market with memorable songs and characters, leading to untold amounts of merchandise and several shorts over the many years. Now that the snow has settled, Frozen II finally takes flight. While certainly finding more to say with this material, the frantic and manic nature rushes into a state of being underwhelming.

The lore is expanded. Royal sisters Elsa and Anna recall a story from their childhood where their dear dad spoke of a magical forest just outside their kingdom. There was once a truce between the people of the kingdom and the people of the forest. But then, for some mysterious and unquestioned reason, war broke out and the forest was lost, as well as grandpa, explaining how their father became a king. Fast forward to after the events of Frozen and Elsa can sense something is wrong. Nature is literally calling her with distant siren voice only she can hear (and sing with apparently). What could it mean? Mystery and adventure abound, of course.

What’s most interesting about the film’s central theme is that it tries to find meaning within life and death, trying to understand more with age. Consider how the goofy snowman Olaf opens the picture by asking Anna about the season of fall and realizing that nothing will last forever. Olaf, innocent as he is, is more intrigued than worried about the future where nothing lasts forever. Nearly every scene following on the adventure has Olaf trying to find some reason to it all but the film ultimately settles his concerns with the answer being a comfy one; love. That love also comes slammed into the third act as there’s just too much going on.

At 100 minutes, Frozen 2 crams far too much into this story to ever let it breathe, the many themes becoming juggled with the numerous character arcs. Kristoph is considering proposing to Anna for marriage but just can’t seem to find the right moment. It doesn’t take a genius to realize this won’t happen until the end of the picture but I questioned just how much mileage this running gag had. It’s not much, crawling to the end with tired results. Also brought up is the true story of Anna and Elsa’s legacy of their parents and grandparents, revealing a troubling history that must bring peace. Also brought up is a duality of man and nature with the spirits being at war with humanity. Also, cute spirit creatures. Also, more death talk.

Visually, the film doesn’t disappoint and tries out a lot of new stuff. Elsa encounters numerous elements of the planet that both aide and hinder her journey, from vivid fire spirts to towering earth giants to horses made of water. Worth noting, however, is that some scenes try to push that concert staging hard, often letting the backgrounds drop out into color meshes of angular shapes and swirling particles.

Speaking of music, yeah, there’s a lot more of that. Do earworms abound? Perhaps but nothing quickly is sticking out from such a recent viewing. Time will tell. I did, at the very least, enjoy Kristoph’s 1980s style music video ala Michael Bolton, transforming a magical forest into a sequence so tongue-in-cheek corny I’m pleased it never winks at the camera. The songs are still crucial to the story and rarely feel like detours, even with Olaf’s song about questioning maturity versus the ways of the world that could be argued as natural. Cute and confounding.

Lastly, Frozen 2’s rush to the finish lines leaves the picture with mixed messages, where a lot of the environmental angles, spiritual aspects, and deeply troubling history of the family is glossed over. There may have been something to such a picture where saving the kingdom means letting it go but that’s perhaps a too dour ending for the likes of Frozen, a franchise somewhat bound by cheerfulness that it has to pump the brakes hard on its messaging to avoid a somber conclusion. This aspect doesn’t exactly ruin Frozen 2 but it does showcase something more that could have been.