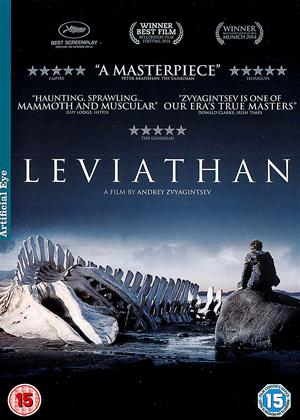 Harsh, without hope but utterly watchable - Leviathan review by JR

I watched this film without any expectations, with the exception of the hope that it would be a watchable, 'entertaining' and gripping.

Having now finished, I can say it is not an uplifting film, but it is extremely well made, well acted and worth watching. It conforms to all the stereotypes that one might have of corruption in the former USSR, however it is not clichéd. Centred around a man who is about to have his home taken from him by the state and is doing his best to stop that happening. As the film progresses there's a definite groundswell of factors set against him, but you always have the hope that events conspiring against him and his family might resolve themselves in a positive manner. It pulls no punches, glamorizes nothing, is extremely well shot, I shall say no more for fear of giving away too much of the story.

But I'm glad I watched it, would recommend it to others and found it enjoyable, not in the feeling it leaves you with, in that it's a well crafted and shot film. It is not a feelgood film, and all the better for it.

Not for the depressed - Leviathan review by BE

This is a morose tale of corrupt bureaucracy and human deception. The actors are very natural and perform their roles exceptionally well. The movie is set in a dismal location, it is without humour and yet is strangely compelling.

maybe this is agood film. however, as we do not speak partial Russian partial sub titling is not very helpful !!

Wow - a meaningful film for once! - Leviathan review by VC

I am no techi so this is just my feelings about this film.

I will say it is quite depressing, so don't expect a happy ending. However, watching this film made me realise how utterly starved I am of films with depth and meaning, and true genuine ART.

The photography is absolutely stunning, with incredible shots and lighting, but full of subtle symbolism as well. But it's not just surface aesthetics - it all means something and is part of a uniquely crafted whole. It is quite unusual to see the way the characters are filmed as part of the background and surroundings, as though the "whole picture" is important.

The "story" seems to be the lens through which to see into the huge dark picture of life and what goes on in it. And in fact, it reminds me of the Book of Revelation and the prediction of the coming of the antichrist and his sidekick the false prophet, as the culmination of the present evil world-order.

Please do also watch the interview with the director - who is obviously that rare thing nowadays - a true artist.

Leviathan is huge, creeping insight into the numbing paralysis that totalitarianism brings to individual aspirations. The camera glides slowly over a bleached wintry landscape in poetic phrases reminiscent of the Russian master Andrei Tarkovski. Time and its passing are embodied by tentative, almost caressing scenes of the age-less Leviathan, beached but intact, embedded in the sand.Wrecks of fishing boats litter the shallow waters a testament to the passage of time and foreshortening of human hope. A "plot" within the lines of this great "epic" has the protagonist cruelly tossed by both State and individual: powerless to affect his fate, he sinks beneath the surging onslaught, finally to succumb to the timelessness of the harsh, black and white landscape. A true "tour-de- force" of a film!

As bleak a film as Andrey Zvyagintsev ever makes. I know Russians who hate his work because they see him as portraying a Russia and Russians that the west would like to think, to imagine it is. All are fated. The Church and State control everything. The little man wants to get along and live but is confounded when he sticks his head over the parapet only to have it crushed

Well worth watching - in fact the acting is gripping. The story looks under the skin of appearances, to the way power is really wielded, nearly always advantaging those in control. Set in Russia - but in fact universal. Would be fascinating to see a film which so powerfully illustrates the corruption of privilege, set perhaps in Britain today......(not the Downtown Abbey variety!).

Leviathan is a 2014 drama film, set in Russia, but with worldwide connotations. Yes you will have to read subtitles, but for almost two and a half hours, you will remain in your seat with your eyes firmly plastered to the screen. The duration almost seems too short.

The film is set on the outskirts of a town on the Barents Sea. It is here that we meet Nikolai and his family: wife Lilya and son Romka. The small town life feels anything but peaceful, as the family struggle against the corrupt mayor who is working to take away almost everything Nikolai owns. With the aid of his friend, they will fight to keep what is rightfully theirs, and stop the mayor once and for all.

Leviathan is noted as being a ‘rework of the Book of Job’ that deals with maintaining faith and trust in God when constantly confronted with hardship. What is actually the most interesting fact about this film, is that the main story was inspired by an event in the United States of America, but was changed to a Russian setting. Why writer/director Andrey Zvyagintsev did this, I am not entirely sure, but it does make the arguments and discussions over its portrayal of the Russian Government seem more pointed towards the American Government.

I had not seen or heard of any of the cast or crew before, but they all did a great job. Their emotion and conflict was felt through the screen.

The screen held wide and powerful shots of the scenery and nature, yet much closer shots of the people. The colouring was dark and daunting. The music was commanding. The scenery was beautiful despite the destruction.

The film does not contain cuts that paste together a picture they want you to see. The creators have been very reserved and want the audience to have time to see the images and decide for themselves how they feel.

Russia has always been a powerful country with figures that make their mark around the world. Russian politics have yet again been thrust into the spotlight, and this film shows that it is an important discussion that needs to be had in many countries. Of course, it is also bringing up uncomfortable and scary ideas for many, and loyalties are being tested.

Leviathan has received immense praise from critics and audience members alike. Online and in-print reviews have scored it almost perfectly, and it has won three of the five awards it has been so far nominated for (including at the Golden Globes).

As a believer in Christ, I connect with the characters’ striving to remain faithful to God, despite the many hardships of life. I give it four out of five stars, because it has almost everything you would want in a film: interesting story, engaging characters, dark and beautiful locations, and much more. I recommend this film and hope to see more like it.