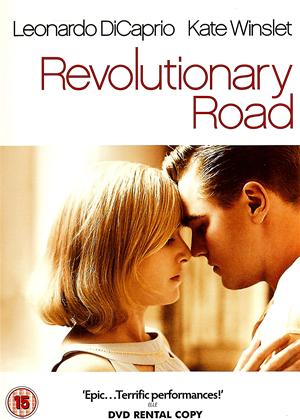 I'm not overly convinced by Leornado di Caprio's talents as an actor so I thought I'd be disappointed; but no! Both actors are brilliant in this tense story.

The wife is so disappointed with her lack of personal achievement and hubby just doesn't appreciate just how hurt she is. The way he grins so sheepishly at breakfast when she calmly turns into the all-American housewife. This is a very fine film.

Another great Sam Mendes film. Both Leo and Kate are fantastic in this film. This is a slow burner but it's both engaging and showcases some great acting from all involved. It's not an easy film to watch but it's a great film that makes you think.

Not a Date Movie - Revolutionary Road review by CP Customer

In time Revolutionary Road will be remembered for Kate Winslet’s performance and that alone. She plays a struggling wife, caught in a marriage that is in freefall. The backdrop is perfect Americana, think Mad Men with its clean-cut presentation and attention to detail. Events unfold, soon transpiring into a series of arguments and mistakes from both husband and wife, as the rot sets in. Sam Mendes has delivered a serious drama, perhaps too bland and frankly boring for many viewers. He may have given Kate a perfect role to show off her talents, but the rest of the film requires dedication to see through till the end.

NOT LISTENING; BUT TALKING - Revolutionary Road review by Robert BUCKNOR

The existential problems of White people are here shown to lead to functional neurosis; meaning being able to function politically, but never personally. This is especially emphasised here given that the only obviously-certifiable character (played by Michael SHANNON) is more sane in his understanding of the world than anyone else (albeit that his response to his own insights is decidedly anti-social).

White people's problems-with-living are inevitably passed-on to their children as they also, in their turn, seek to achieve the meaning, the identity & the value largely absent from a culture superficially-addicted to materialism. But this central theme is not fully-explored, save for the lead (played indifferently by Leonardo DiCaprio) working in the advertising business - which he hates for its essential phoniness. But what in his family made him that way, we might well ask? And why is his response to it so weak?

Thus, no solution to the problems of the two central characters is ever presented, except the pointlessness of running away from one's problem when they will never run away from you. The best that the wife (played by the always-superb Kate WINLSLET) can do is to procure an abortion so that no more suffering people are brought into the world.

That White people lack the courage to be themselves explains a lot regarding their higher rates of, for example, suicide, depression & loneliness. They are thus reduced to acting-out their lives (while never truly living them) according to stage-plays written by others, regardless of self-esteem or whether or not those others have their best interests at heart; ensuring that they never actually achieve any self-interest or self-esteem. (This is exacerbated by the fact that Caucasians are also taught to be morbidly fearful of other cultures even if they could learn something from those cultures to their advantage.)

This essential phoniness regarding one's relationship with oneself and regarding that with other people can only lead to bitterness, frustration & resentment at the resultant fear of social ridicule, ostracism & censure. Being different to other White people and, thereby, running the risk of psychological suffering for not confirming with their limitations and fears - albeit, paradoxically, conformity with those with whom one can never be friends with anyway precisely because of the difference.

The insightful writing is good, but the 1950s suburban milieu is largely pointless since the issues discussed here would be true in any White ghetto at any time during the last 500 years. Still, the acting performances generally excellent - particularly Kathy BATES in a supporting role - but where are the true revolutionaries? Not here!

Watching this film I felt there was perhaps,something I had missed earlier. I kept waiting for it to fall into place. It didnt. My conclusion was this is a series of average cameo performances only loosely connected. Maybe some parts were cut and this has affected the continuity for me. Insufficient weight was given to some pivotal/symptomatic points that could/would have qualified subsequent events.

Well, that was depressing. - Revolutionary Road review by CP Customer

I can sum this film up in a sentence: Like the break up, but seriously un-funny.

I thought this was supposed to be a big thing? Winslet and DiCaprio reunited after Titanic, will true love prevail? And after watching this film I can honestly say I felt truely miserable. I think it was supposed to call out to me, as the focus is mainly on Winslet. I thought I was supposed to feel moved or touched or think 'wow what a film'.

I did not. I also didn't feel that they were a 'passionate couple' I felt no connection between them as husband and wife which made the events less shocking and more like watching Jeremy Kyle.This film needs to come with some heath warnings prior to viewing:

Don't watch with your parter, or you will argue. Don't watch if you are feeling a bit depressed. Don't chose to watch this over watching Jeremy Kyle.Don't watch this film.

0 out of 6 members found this review helpful.
Show more
We use cookies to help you navigate our website and to keep track of our promotional efforts. Some cookies are necessary for the site to operate normally while others are optional. To find out what cookies we are using please visit Cookies Policy.