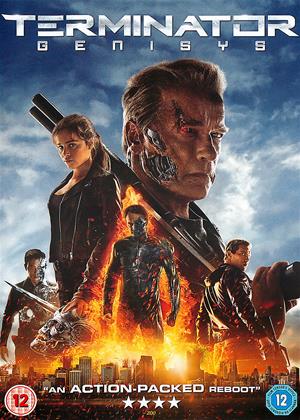 Recently seen a review of Terminator Genisys (GT) at 1 star however TG is much better than some critics have stated. It may have the same style story formula as older Terminator movies but is that any different from any of the recent output from Marvel or DC Comics? In-fact, I'd put its style very much into Marvel or DC Comics territory and that's maybe where TG could have been better by making itself more adult and forgetting the 12 certificate. Jai Courtney and Emilia Clarke do a good job of their characters but the start of the show is still Arnie even though his dialogue has been cut more to a level of Terminator. This terminator is better than the too human version of the previous films.

Overall the film is an enjoyable Saturday Evening watch that is mostly, but not quite, brain dead entertainment, visuals are good, acting is fine.

woke in a cold sweat - Terminator Genisys review by mp

Thought for a moment that I didn't waste my precious time watching this trash, up there with the worst films I have seen, not many films that I give up on but this was one. Won't be watching any more of them, just stick to the first two plus salvation - this is beyond salvation.

I had heard this movie was bad but as I am an Arnie fan, thought I'd give it a go. It is a very poor movie - really just a copy of story themes from the other movies in the franchise but not made with any conviction or production values.

Still say terminator 2 probably the best of the bunch. Matrix had a set run, but Terminator can be re-done. All good fun i guess, but is much like a lot of modern sci-fi. Lots of noise and colour. Entertaining on big screen and projector but not one to keep.

The worst film this year so far, a real let down to the series! - Terminator Genisys review by CS

Reputedly, this is the second biggest grossing film in the series so far, but after watching it, it's very difficult to see why? I'm guessing this claim has more to do with marketing than actual sales!

I had to watch this in two parts, as I found it such a boring and badly made film, but I forced myself to watch it all through until the end. I'm a big fan of the films and of Arnie, so was really disappointed when I watched this.

The Script is extremely weak, the Directing poor, the film is so full of holes in the plot and continuity errors, it's been really sloppily edited and the Special Effects upon which it mainly relies, are so badly done, everything looks like it has been chopped to pieces in the editing suite, in an attempt at covering up the bad filming!

The actors are so miss-cast, they fit the roles like square pegs in round holes. Emilia Clarke, who plays Sarah Connor, is like a soppy little schoolgirl and just doesn’t have the gravitas or power to play the part! Jai Courtney plays Kyle Reese and again is just not right for the part, it’s like asking a WWF Wrestler to play the part of a shy and sensitive character, big muscles and dumb acting don’t quite fit the part! And Jason Clarke who plays the part of John Connor is just so out of place and wrong for the part! In fact the only saving grace in this film is good old Arnold Schwarzenegger, who holds the film together and if he hadn’t been in this, then in my opinion, it would have simply fallen apart!

The film is supposed to make light but humorous nods to previous films in the series, but to start with, it seemed more like a re-make of the first film, but then introduced plots from the second, which I found really confusing, so rather than actually being a completely new film with a new plot and moving on from previous episodes, I thought it was more like an amalgamation of T1 & T2 joined together!

All in a very disappointing film, with no sense of direction, quality or even I don’t know what! I wonder why this film was ever made and feel that it’s let down the whole franchise, as the rest of the films, whilst some are better than others, all have stood the test of time and been a credit to the series. But I feel that this film could finally be the nail in the coffin!

In an attempt to invigorate the Terminator franchise, the movie series has gone through many attempts to recapture the perfection of its first two films. But adding a female Terminator (Terminator 3: Rise of the Machines) and doing a gritty prequel (Terminator Salvation) did little to enhance the story we all know. By this point, everybody knows all the Terminator lore of Judgement Day, Skynet, Kyle Reese and the messy time travel aspect thrown into it all. For that reason, Terminator Genisys is the most noteworthy of Terminator sequels in that it shakes up the expected timeline. There are new events, new characters and new Terminators that exist as far more than a gimmick of the familiar.

That doesn’t mean the film isn’t afraid to play off nostalgia though. In fact, the majority of the movie’s humor and entertainment comes from winks and nods to the first two movies. Remember the original T-800 when he was a buff and naked Arnold Schwarzenegger? He’s back. Remember the T-1000 and how that Terminator had a liquid metal form to kill his targets? He’s back. Remember all those corny catch-phrases like “I’ll be back”? Yeah, they’re back. Thankfully, these elements are treated more like campy sprinkles for the Terminator fans and do not relegate the movie to your standard movie retread.

But before we get to the game-changing action, Genisys has to reintroduce us to the lore once more. We have to hear the same story all over again of Skynet destroying the world, the machines enslaving humanity, John Connor leading the resistance and Kyle Reese going back in time to father John Connor. After three movies of clearly spelling out all this plot, you’d think that the fifth film wouldn’t have to drudge through all this exposition again. Aside from trying to bring in newcomers to the series, this setup seems required to explain the clunky mechanics of alternate timelines. This, too, is also completely explained over long scenes of exposition. How is it that Star Trek (2009) managed to do this same writing style so much better and with less explanation? I guess the director just doesn’t have that much faith in the summer audience to piece this puzzle together.

After we’ve gotten past the lengthy introduction of both story and character, the movie finally picks up with the chase. For this Skynet-destroying outing, we have Kyle Reese (Jai Courtney) and Sarah Connor (Emilia Clarke) working together with cocky attitudes about the impending D-day. The lore of Terminator requires that they fall in love to birth John Connor (played in the future by Jason Clarke), but they don’t seem to have much romance between them. One might think this was the film trying to steer their relationship in a different direction, but you can see its story desperately trying to push these two together (despite never forming chemistry between the two). Arnold Schwarzenegger returns to his roles as both the good and bad T-800 Terminator appearing younger, slightly older and really old. He’s been upgraded from killer to puppy to Pops in how he has become a father figure to Connor. As expected, he steals the show with his amusing methods of trying to blend in with humanity.

The Terminator chasing them this time is the T-3000 (what else would they call it?), a new machine built off human cells that can reshape with the use of magnetic materials. This makes him the most unique Terminator villain to date in how he is able to shift his figure into several different forms, revealing many layers to his being. It also means our heroes are going to have to be more clever in dispatching him without using the usual answer of big guns, though that doesn’t stop them from using plenty. It just wouldn’t be a Terminator picture without some big stunts and Genisys offers plenty. A school bus flips through the air and plows through traffic on a bridge. Arnold goes head-to-head with the T-3000, smashing him through walls and beating him with anything he can grab. There’s even a chase with helicopters zooming around skyscrapers. All of these exciting sequences help to offset the time travel mumbo jumbo that just keeps digging bigger plot holes. At one point Sarah Connor just simplifies the scenario for a detective played by J.K. Simmons that they need to save the world from being destroyed. Why can’t the rest of the plot be that simple in delivery?

Terminator Genisys is a bit of a mess of ideas, but they’re at least positive steps in the right direction for a movie franchise that just didn’t know where to go. Now it has some ideas and some surprises to boost the series out of the doldrums of sticking to its roots. This reboot/sequel pays homage to its evolution, but also takes a chance by ripping out a few pages to redefine itself. It may not completely rewrite the rule book, but it does add a dash of excitement to its latest chapter. It also feels rather old fashioned in that the film doesn’t focus so heavily on the doom and gloom as much as the previous films. On that basis, Terminator Genisys provides some hope for its own future and perhaps our own. That may be giving the film too much credit, but in a cinema world where dystopian futures seem all the rage, it’s slightly refreshing to see one that wants to halt disaster (while still causing a bit of it along the way).