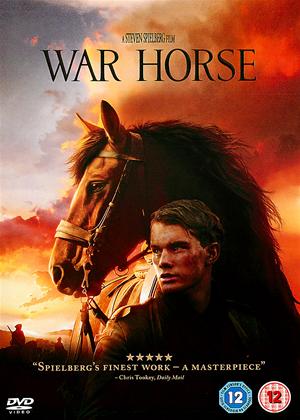 I've waited quite a while before writing a review of this film because I'm honestly in two minds: is it a sentimental pile of old horse manure, or is it a masterful adaptation of a well-loved children's book + successful stage play?

Well, it's certainly emotional and I'm not ashamed to say that it brought a slight tear to my eye at the end when Joey the horse is auctioned. The majority of Steven Spielberg's films tread a fine line between good family entertainment and outright schmaltz and this one is no exception. A broad streak of sentimentality runs through the film and in many ways it is just so predictable: father buys horse, boy rears horse, boy is parted from horse, both have bad experiences, boy is reunited with horse, they live happily ever after.

The film is populated by a host of well known British acting talent from Peter Mullan (who seems to make a habit of playing drunks, from his own 'Neds' to Paddy Considine's 'Tyrannosaur'), through Benedict Cumberbatch to the always excellent Eddie Marsan (who has a small part near the end) to name but a few. Spielberg manages to portray both the futility and horror of World War I via a cavalry charge against machine guns (starting out brave and optimistic, ending with riderless horses) and via a futile advance across no man's land. Unfortunately it also includes a very clichéd scene where an Englishman and a German co-operate to free Joey the horse entangled in barbed wire, a scene too silly for words. Add to this the fact that the Germans speak English with silly faux-German accents and I think I'm coming down on the 'horse manure' side of the verdict.

The film is well acted but clichéd, well photographed but over-pretty, the dialogue is trite and while it is well directed it is simply over sentimental. Yes, I enjoyed it but found it generally unsatisfying and that is perhaps reflected in the fact that it was nominated for 6 Oscars and 5 BAFTAs but won none. I'm sure many people loved it, but I can only rate it at 3/5 stars.

The violence of the Great War is much too dumbed down and it's a bit like "Black Beauty goes to war".

Some of the scenes take a little believing. Good special effects, though.

I had hoped for better than this from all the hype over it, but I'm left very disappointed.

Black Beauty meets Blackadder Goes Forth - in fact the storyline is very little more than an updating of Black Beauty to the early part of the twentieth century. This was really too soppy and sentimental for my taste. Hardly a proper memorial for the millions of horses killed in the Great War and I'm afraid I didn't shed anything like a tear at any part of the film. It was just too unbelievable.

this film is a must from the stable of Spielburg, tense drama and also the reality of what war can be like

Stephen Spielberg’s vision of the novel and long running play by Michael Morpurgo boasts an impressive cast list that includes Emily Watson, Benedict Cumberbatch, David Thewlis and Jeremy Irvine. It tells the story of Albert a young man who enlists during the First World War after his beloved horse Joey is sold into the Cavalry.

For anyone with a soft spot for animals the trailers for War Horse were enough to set you on edge, prepare not to be disappointed, this is a desperately sad and fantastically moving story of bravery, loyalty and companionship. I will not hide the fact that I cried like a baby.

Fear not however, this doesn’t necessarily give the ending away, War Horse is not a tragedy, the ending in fact is massively uplifting and dramatic, seeming to me hugely evocative of the Western’s of prolific director John Ford and his kind of produced movies in which the ache of loss, horror of war and joy of reconciliation are epitomized in the beautiful and iconic long shots as a lone rider returns home from his journey.

Beyond this the movie is a series of brilliantly composed action sequences in which both man and beast battle and die. The movie spares no one, as war itself does not either, and it openly portrays death and violence in a graphic yet understated fashion: this is not violence for the sake of it, but rather an honest depiction of the waste of war.

Couple these visual traits with a handful of intimate and expressive performances and a heart wrenching bond between a boy and his horse and Spielberg has once again delivered a meaningful and astonishing movie.