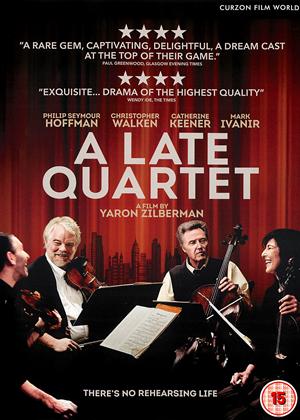 Reviews (2) of A Late Quartet

One for adult movie buffs - A Late Quartet review by BE

Superb performances from Christopher Walken (top marks for avoiding the Botox) and Philip Seymour Hoffman (what a terrible loss to the movie industry) in this adult presentation of the dynamics and personal intrigues between a group of musicians. Excellent.

I love Christopher Walken, and his performance here is as superb as one would expect from him. Ditto for the other actors.

Unfortunately, the whole movie quickly descends into a relationship movie rather than anything to do with music. Lots of shouting, crying and histrionics - which at times looks a bit like one of those classes at US drama schools where girls scream and cry about how unfair life is. Well, cry me a river honey...Shouldn't you be practising the violin instead of behaving like a toddler?

Anyway, all watchable and so-so - it's just a shame there was so little music, and so much Noo Yoik relationship nonsense, though I suppose it was supposed to show Walken's predicament more clearly.

I liked the ending though.

Three stars. Something to watch when there's nothing else on.

Films like this seem to be coming around quite frequently as of late with January’s Quartet and last years The Great Exotic Marigold Hotel. However A Late Quartet differentiates itself by placing itself firmly in the drama category with any moment of comedy/levity in the film failing to have any effect at all.

Telling the story of an acclaimed string quartet that finds themselves fighting with each other when their eldest member and moral leader Peter (Christopher Walken) is diagnosed with Parkinsons and must leave the foursome after their next performance. As second violin player Robert (Philip Seymour Hoffman) expresses his displeasure of playing second he opens up a power vacuum, one that Daniel (Mark Ivanir) is intent on closing before Robert can ruin his position as first violin.

Clearly director Yaron Zilberman is in love with classical music, he understands its subtle nuances, he works with a script that portrays them perfectly. What the script fails to do is make its characters act like human beings from Daniel’s obsessive love for his craft, even to go so far as manipulate his friends and co workers to the extent that all anyone can do is hate him. The characters don’t behave normally, except for Peter as the straight laced, uncomplicated teacher, the guide through the rough terrain that is musical perfection.

All the performances are exquisite with the relatively unknown Ivanir even managing to make his illogical character at least borderline charismatic. Hoffman and Catherine Keener play the odd dynamic of a married musical couple well and their interactions together are both desperate and loving, something they manage to marry together effortlessly. The real standout however is Walken, who appears to be having one hell of a career resurgence with deeply moving performances in last years Seven Psychopaths and June’s Stand Up Guys.

bring beauty out of the music, to show the wonder that music can have on the mind, body and soul and how it can inspire right up until we can’t play anymore. It’s just too bad these impulse driven buffoons can’t just stop for a moment and listen to the music.