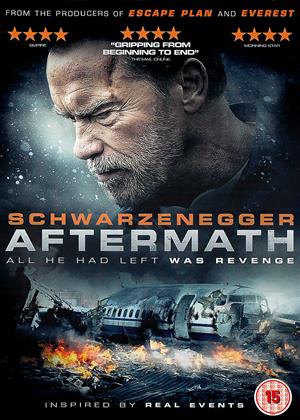 Since retiring from politics and going back into films, Arnold Schwarzenegger has starred in a variety of films, trying to broaden his output. Whilst some, like The Last Stand with Johnny Knoxville, have absolutely played up to his action image and satirised this, he has also thrown himself into serious films.

Like Maggie, which was his first film to truly stretch himself as an actor, Aftermath finds him as a grieving father struggling to not only find answers but also attempt to forge a new life through the upset and shock. It is based on a true story, although the setting has been moved from Russia to the USA.

Schwarzenegger is genuinely good in this film. Although when you first see him on screen, you start to think of his quotes and the more silly roles he has played, it is surprising just how quickly these vanish as the film continues. Special mention must also be given to Scoot McNairy, who brings a real gravitas to what is effectively a one sided role.

I'm glad I took a chance and watched this. - Aftermath review by ML

Not your run of the mill Arnie film by the stretch of anybody's imagination.

Shows what grief can do to otherwise good people.

Not really a thriller - Aftermath review by GP

An enjoyable film although definitely not a thriller. This is a human drama storey where the characters are believable although the story is predictable and moves as a leisurely pace.

I'm a sucker for an Arnie movie, and although this is a departure from his earlier crash bang wallop type of action film, this is a well produced and acted film that doesn't go over the top.

Interesting but so-so movie based on a real case, transplanted to the USA - Aftermath review by PV

This is a watchable film - with Arnie aged 70-ish phoning it in as a supposed Ukrainian (I think).

A shame I though that this could not be set in Germany. The real life story was about a Russian man who hunted down the German (or Austrian or Swiss) air traffic controller and killed him. I remember the news story.

So not bad and obviously predictable, but slight and I suspect massively padded up to make a decent story - I bet the last scenes are not based on truth.

The ending is sudden and odd.

It's a hard watch, but it's a beautiful film full of heart, with a nice performance from arnie, the climax to the film is satisfying, but the film does feel a little uneven, and not totally believable, but I was never bored, and I would recommend it not just for arnie fans, but to any one who wants an alternative viewing experience

There’s a plane crash. Air traffic controller feels guilty, husband of dead family feels grief. As the trailer has it. ‘two lives will collide’. If only. It’s based on a true story but the by-the-numbers plot arc and emotional drama make for predictable cinema. In fact you don’t need to watch the film at all. The trailer will tell you everything and save you having to sit through it.

I’d like to root for Arnold Schwarzenegger venturing out of his comfort zone to trade up roles for a film where he has to show more emotion in his face than muscle in his arms. Aftermath would sound like the perfect project to flex those seldom seen acting muscles and showcase how his more dramatic side. It’s character driven, atmospheric, moody, and brooding with a sadness in everything from the events to the settings. It’s just too bad that the film drowns itself in so much forlorn dressing it can’t cover up its crash into a corner, never finding a proper direction to take this tale of loss.

It’s the story of two characters. Schwarzenegger is a recently retired foreman, eagerly awaiting the arrival of his wife, daughter and expectant granddaughter. Scoot McNairy plays an air traffic controller that makes an honest mistake that causes two planes to collide. You can probably guess who was on that plane. For the rest of the film, the two men find themselves struggling to live with themselves; Schwarzenegger over the loss of his family and McNairy over making such an error that forces him into hiding. All Schwarzenegger wants is for someone at the airline to apologize and not hide behind legal deals and compensation. All McNairy wants is to see his son who is being plucked away from his as his wife finds it best to distance herself from someone receiving death threats.

So far so good. But as the film prattles on with mental breakdowns and crippling loneliness between the two characters, it slowly dons that this story won’t find much of anywhere all that insightful or satisfying. This becomes apparent when Schwarzenegger finds little to do in his grievance besides seek out who made the error and give them a piece of his mind. And, no, it does not end well, resulting in a bloody showdown that feels like a disappointing cop-out for sliding Schwarzenegger right back into his familiar form of the lethal killing machine he has played before.

It’s more depressing that the film never delivers on a solid enough script as there are hints of some of Schwarzenegger’s best acting for such a quiet role. He surprisingly restrained in his distraught rage, his voice shaking as he shoves a photo of his wife and daughter in the face of lawyers seeking to buy him off. He even manages to avoid his more comical outburst mode he is known for in his comedies, removing the easy laughs of his serious attempt at acting. Scoot McNairy is also in good form as a weeping man whose life quickly crumbles to pieces. Small scenes of him working at a travel agency or eating dinner alone in his relocated apartment paint a somber picture of one man’s painful exile.

Aftermath has all the ingredients to be a great drama, but does little more than wallow in guilt before spiraling into an unfulfilling catharsis. I would almost recommend seeing the picture to witness that Schwarzenegger has a little something extra left in his aged bag of acting, digging out parts of himself that have rarely been on screen before. He just needs to find a better script so his twilight years don’t become the lackluster aftermath of his better days.