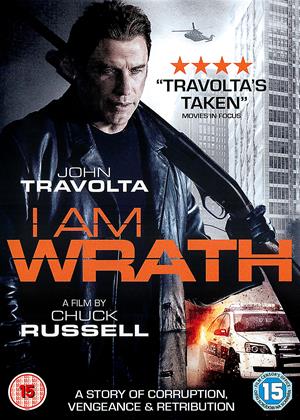 What's up with his hair? - I Am Wrath review by MM

It's OK, but very much seemed to be a poor man's John Wick. Wife dies, happens to be an ex-something or other comes out of retirement to get revenge blah blah blah!

What got to me through the film was his hair. It's so unnatural - looks like it is glued on.

Very distracting and quite funny.

Funny fun, with a gun - I Am Wrath review by NC

Not quite as gritty as Death Sentence. That holds the attention. Ramps along quite well for type of film. Not sure how the super violent, super guns, super dead-everywhere, becomes humorous at the end? Double act having a laugh etc. Red and Red II i can understand, as is obvious all the way through.

Wonder if, with the rapid increase in gun deaths in USA, this genre of film may become less fashionable?

I Am Wrath review by Mark McPherson - Cinema Paradiso

I’ve been down this tired and aged role of the middle-aged family man going on the hunt for street revenge that I had to wonder if I Am Wrath was intended as a comedy. Surely it must. How could it pitch such passive theatrics, a ridiculous plot of government corruption, a buddy comedy aspect, and still be a gritty Death Wish style romp? Plus, I know that John Travolta has a bigger funny bone inside him than that of a hard-edged vigilante. What is he doing in this low-rent action slop? Was Bruce Willis too busy?

This is a film so drenched in its story that it forgets about the characters. Consider how we don’t even see Travolta’s characters until all the proper staging is complete. Columbus, Ohio is crippled by a ridiculous surge in gang violence despite the corrupt governor (Patrick St. Esprit) declaring everything to be fine. Not only is the city doing great, but they’ll soon have more jobs with a new oil pipeline. There are EPA concerns, but his office is conducting their own investigation with Abbie (Amanda Schull) doing research for them. But what if her research says it’s bad for the environment? Well, time to shoot her in a parking lot.

The only problem is that Abbie’s husband is played by Travolta and he’s not happy. With the cops offering no help, he goes all John Wick on Ohio’s gangster underbelly. This includes a ridiculous scene where he smashes through his closet to reveal his secret stash of guns and passports and an even sillier reveal of his best buddy Dennis (Christopher Meloni) harboring a massive weapons stash underneath his barber shop operation. Together, they’ll hunt down hoodlums and corrupt cops that target them and their families, all leading up to a showdown at the governor’s estate. These are not spoilers, especially if you’re familiar enough with these types of movies that you can almost piece it all together before the end of the first act. And if you don’t, fear not; the movie will slow down and flashback just in case you missed something.

There are so many cliches laced into this tired premise that it’s almost cute how earnest the picture is with this staging. Consider Travolta’s first act of going out on the hunt into a dive bar. Of course, he wears a black hoodie with the hood over his face to conceal himself. Note to young gangsters; if you ever see an old man in a hoodie, run for your life as he’s probably trying to kill you. I would love to see the scene of Travolta’s character actually going to buy one of these. There’s also the essential scene where a crime boss hears of Travolta and Meloni’s murdering of gangsters and, after severing a finger from one of his cohorts, orders that he wants these two men dead, including their family and dogs. Always with the dogs, even though there are no dogs present in this movie, missing a moment of comedy where they could leave a severed dog head in Travolta’s bed.

And in case you think I’m making too light of this action picture, consider the goofball antics of Travolta and Meloni which are so bonkers they feel like scenes from another movie. They’re running bit is that Meloni always shows up before Travolta is about to make a kill and steals it from him. I guess the director thought it would add some levity to them bickering about a kill, but it only strengthens the argument that this movie is never taking itself seriously in a picture that can’t decide if it’s Death Wish or Death Wish 3.

I am Wrath almost reaches levels of being so bad its good, to the point of the title referring to a Bible verse that Travolta quotes unironically in the film’s ludicrously violent climax. It’s a film you could see as a parody trailer but never a full movie, as the sillier moments of action never sync up with the more emotional ones of Travolta mourning his wife. It’s a lame premise doomed to evaporate from the mind, but I at least had one or two chuckles against the film’s obliviousness to its overused elements, a minor pleasure before the movie turns to vapor.